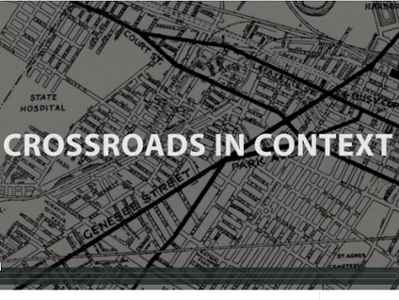 The archive documents pedagogical possibilities of benshi in today’s classroom. This section of the archive includes four components that, together, show the collaborative process among a team composed of: Kyoko Omori as the project leader; Hamilton College students; and some residents of the local community of Utica, NY. Among other things, the project addresses the artistic intellectual, and ethical challenges of learning other peoples histories and cultures and striving to tell their stories with empathy.

The first component of this section shows the making of a silent documentary film, Crossroads in Context (2017), about refugees in our local community of Utica, NY who are taking ESOL (English for Speaker of Other Languages) classes. Importantly, we intentionally made this movie silent, shooting and editing with live benshi narration in mind, just as historical Japanese filmmakers sometimes did. The documentary was made over three summers, from 2014 through 2016, through collaborations with students from Hamilton College and Doshisha University in Kyoto, and supported by Hamilton’s DHi. The silent film documents weekly English classes at the local art museum in Utica, a project led by April Oswald, Museum Education Director at Munson Williams Proctor Arts Institute. Titled “Shared Traditions: Visual and Language Literacy,” the English/Art program was held for “groups of recent adult refugees learning English as a second language.” In all, a total of twelve Hamilton College students and three Doshisha University students worked on Crossroads over the three years of its making from 2014-2016.

The second component of this section features two versions of student benshi performance done alongside Crossroads in Context. One version is by a group of six students who prepared their benshi script collaboratively by learning from individual refugees appearing in Crossroads about their places of origin. The group performed live in front of the Hamilton and local community in 2014 with original music written and performed by the Orochi Ensemble, as described above. The other recording of benshi performance in this section comes from another Hamilton College student, who modified the first group’s script and added her original twists in a studio recording with a different musical score.  Thus, I present here two audio versions of student benshi performance for Crossroads in Context.

Please follow this link for interviews with students who performed benshi alongside Crossroads in Context.