Benshi: Who Are They? 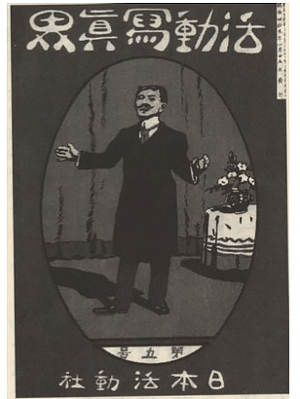 The term “benshi” derives from the longer designation, katsudo shashin benshi (??????), which parses literally in Japanese as “motion picture speaker.” During the silent film era in Japan, these vocal narrators sat or stood in a dimly visible spot to the left of the movie screen and spoke or chanted their setsumei (??) or “explication” alongside the moving images. Frequently accompanied by live music, benshi performers were considered indispensable at cinemas in Japan during the early decades of the twentieth century, as seen from the fact that almost all movie theaters at the time hired their own benshi if their budgets allowed. Typically, each individual benshi performed three functions as part of their setsumei: explicating the visual narrative, voicing character dialogue, and providing any extra-diegetic information necessary for comprehending the narrative content of the film, along with humorous remarks, observations, and other reflexive commentaries. Generally, benshi did not alter their voices significantly when depicting characters of different genders and ages, a practice in line with what had been done in more traditional oral performing arts such as joruri. Even so, performing styles varied considerably due to a range of factors, including the personal traits and tastes of individual performers (e.g., pitch, timbre, diction, pacing, rhythm, etc.); the types of movies being screened (e.g., domestic or foreign films; comic, action, or romance genre films); and the preferences of the audiences that benshi catered to (e.g., factors like gender, age, profession, and region). Moreover, many benshi took full advantage of the freedom they were given in writing their scripts, since the process of preparing benshi narration was almost always done hastily, after a single screening of a film shortly before the first public viewing.

Perhaps due to their ability to shape the reception of movies, benshi were often more popular with early Japanese film audiences than movie actors; and fans often chose which theater to attend by following their favorite benshi. In addition, because they always performed live, benshi frequently improvised and even digressed significantly from the plot synopses provided by movie production companies, as well as from the text shown in intertitles. Some benshi also incorporated literary sources and made cultured allusions as part of their “theatrical” performances. Such conditions and practices resulted in a unique benshi narration each time, even for multiple screenings of the same movie. Interestingly, police often sat in theaters to make sure that benshi did not change the storyline of the movie into something “injurious to public morals,” suggesting that the government actively worried about the potential of benshi to shape not just public taste but social mores. Quite literally inter-mediating for popular Japanese audiences the global spread of film as both modern technology and artistic medium in the early decades of the twentieth century, and also making the new (and highly mediated) world of cinema more immediately legible by way of their vocal performance, benshi silent film narrators navigated between the forces of global modernity and the tastes and desires of local Japanese audiences at an especially charged historical moment.

During the peak of their popularity in the mid-1920s, more than eight thousand benshi were registered nationwide in Japan. Despite (or perhaps precisely because of) such popularity, however, some filmmakers and critics (most especially those connected with the Pure Film Movement) disparaged benshi performers as the primary obstacle to the maturation of Japanese cinema into a fine art, as the grammar of filmmaking became increasingly sophisticated in the 1910s-20s. Subsequently, with the advent of movie sound technology during the 1930s, most benshi lost their jobs. Certain star benshi, however, managed to sustain a career by moving on to the radio and to print media, and eventually to TV after WWII. While the golden age of silent film faded out more than a century ago, a handful of professional benshi still perform today in Japan and around the world, adapting this art of live verbal narration to the tastes and possibilities of our current moment.

Obviously, the biggest challenge to learning about historical benshi today stems from the inaccessibility of their transitory, live performances. Benshi performance can be understood as transitory in at least four senses: first, it was a live oral performance; second, benshi narration took place only alongside a projected cinematic image, i.e., another form and medium of entertainment unavailable for repeated viewing at home; third, each movie was shown only for one week at each theater; and fourth, benshi performance was enjoyed as part of popular culture and thus often considered disposable. In addition to these intrinsic qualities, scholarly attention to silent film has up to this point largely overlooked or sidelined the oral/aural aspects of cinematic experience in favor of the visual.

Unfortunately, we lack even indirect means to access such multisensory events, since the technology from the time did not allow live sound recordings of any sort in movie theaters. In fact, benshi did not have the benefit of mechanical amplification technology. Rather, they modulated the volume, pitch, rhythm, timbre, etc., of their voices in artfully timed coordination with the images on the screen during their setsumei, striving to be heard over the sound of the film machinery and other ambient crowd noise. Moreover, the physical spaces (i.e., theaters) where these performances took place and were enjoyed by diverse audiences no longer exist. Another challenge comes from the scarcity of contextual matter, since benshi culture was consumed as popular entertainment and, therefore, its material substrate generally regarded as disposable. As a result, museums and other institutions of elite culture have largely ignored this performance tradition, neglecting to preserve, much less restore, items of benshi fan culture. Fortunately, however, individual benshi fans did amass their own collections of such ephemera.

Image top:  cover for the January 1910 issue of Katsudo shashin kai (The World of Moving Pictures).