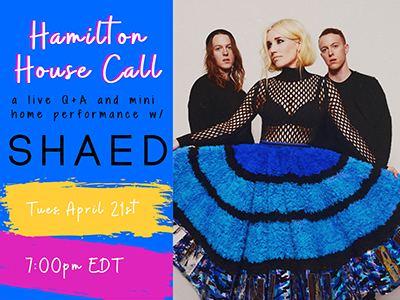 The Office of Student Activities at Hamilton College has arranged a special livestream Q&A and performance by platinum-selling trio SHAED.

The group had a banner year thanks to the global success of their breakout hit single “Trampoline.” Taken from the band’s 2018 EP, Melt, “Trampoline” made waves after being featured in Apple’s MacBook Air ad campaign, with feverish radio play landing them at #1 on both the Alternative and Rock Airplay charts, #1 on Billboard’s Emerging Artists and racking up over half a billion streams online.

Now, SHAED is coming to Hamilton – virtually – for a live Q&A session and mini performance. The event, organized by the Office of Student Activities, is one of the many ways that our Sadove Student Center is staying engaged with students during this time of distance learning. Thanks to their generosity, all admitted students in the Class of 2024 are invited to join in the excitement.