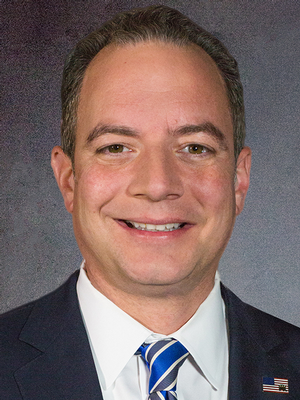 Reince Priebus was named Donald Trump’s White House Chief of Staff shortly after the 2016 campaign concluded. Prior to managing the White House staff, Priebus was the longest-serving chairman of the Republican National Committee in modern history. He oversaw a dramatic turnaround of the RNC, rescuing its finances, repairing its operations, and rebuilding its ground game. By welcoming new voters and harnessing the power of new technologies, Priebus built the infrastructure needed for landslide GOP victories. He left the RNC as one of the winningest chairmen of either political party in American history.

A successful chairman of the Republican Party of Wisconsin, Priebus created the framework for one of the most historic election cycles Wisconsin has ever experienced. During his tenure, Republicans in the state elected Ron Johnson to the Senate, gained two additional U.S. House seats, won the Governor’s mansion, and took back both the state Assembly and Senate, defeating the leaders of both those chambers.

Priebus has a long history in Republican politics as a grassroots volunteer. He worked his way up through the ranks of the Republican Party of Wisconsin as 1st congressional district chairman, state party treasurer, first vice chair, and eventually state party chairman. In 2009, Priebus served as general counsel to the RNC, volunteering his time to help manage the party’s most difficult challenges. Priebus will be a visiting Fellow at the Institute of Politics at Harvard’s Kennedy School this spring. Currently, Priebus serves as president & chief strategist of Michael Best & Friedrich LLP, and chairman of the Board of Advisors of Michael Best Strategies, the firm’s government relations and public affairs group.