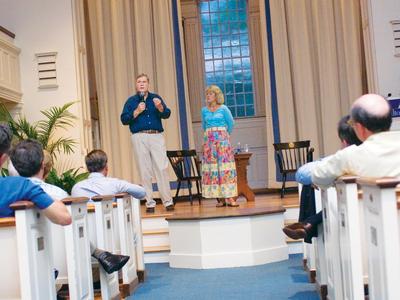 Tom Vilsack '72 started the most recent election season in November 2006 as the first of many Democratic presidential hopefuls. He ended it 26 months later as incoming President Barack Obama's secretary of agriculture. While it's not quite the White House residency Vilsack and his wife, Christie Bell Vilsack K'72, once hoped for, he may ultimately "have more sway over U.S. greenhouse gas emissions than anyone" on Obama's so-called energy "dream team," Lee Schipper of the University of California at Berkeley told The New York Times.

Beyond that, Vilsack told The Washington Post, "This is a ­department that intersects the lives of Americans two to three times a day — every single Amer­ican. So I absolutely see the constituency of this department as broader than those who produce our food — it extends to those who consume it."

Obama gave his former rival a full vote of confidence. "To lead a Department of Agriculture that helps unlock the potential of a 21st-century agricultural economy, I can think of no one better than Tom Vilsack," the president-elect said Dec. 17 in announcing the nomination of the former two-term Iowa governor and head of the Democratic Governors Association.

"As governor of one of our most abundant farm states, he led with vision, promoting biotech to strengthen our farmers and fostering an agricultural economy of the future that not only grows the food we eat but the energy we use."

Vilsack, confirmed Jan. 20, takes charge of USDA — one of the largest federal agencies, with a budget approaching $100 billion — at a moment of difficult transition for the nation's agriculture system, dominated by corporate farming: About 5 percent of farms now account for three-quarters of farm production, according to ­Vilsack's department. Beset by a troubled economy, recent high-­profile food-safety failures and a continuing debate over the place of subsidies, agriculture also must grapple with its complex role in the nation's energy problems — and solutions.

Vilsack acknowledged the task in accepting the nomination, ­saying that his department would "aggressively promote policies and programs that support sustainable practices, to conserve and preserve our precious natural resources" as well as to ­"promote American leadership in response to global climate change" and "place nutrition at the center of all food-assistance programs."

He has moved quickly to emphasize school nutrition and food assistance as well as to push for a stronger food-safety system under a unified inspection agency, telling Bloomberg News, "We need a single agency that's working in a modern framework. We don't have that today." He also has served as point man for an Obama plan to cut more than $1 billion in "agribusiness" farm subsidies — "more change than many farmers bargained for," said the home-state Des Moines Register.

Termed by The New York Times "a strong proponent of renewable energy and developing the nation's alternative fuel industry," Vilsack has been a consistent backer of ethanol and other biofuels. But, the Times noted, he co-chaired a 2007 task force for the Council on Foreign Relations that called for gradually eliminating subsidies for such fuels. Time magazine gave the appointment mixed reviews, noting that Vilsack "does have predictably close ties to traditional agriculture and agribusiness" but that "he has also been a supporter of farm-conservation programs, clean-water regulations and a cap-and-trade scheme to prevent global warming."

Recipient of an honorary ­doctorate from Hamilton in 2001, ­Vilsack was back on the Hill with his wife in 2007 as they delivered the keynote address on Reunion Weekend. Their son Jess is a 2000 graduate of Hamilton.