Steve Orlando ’08 is one of 10 individuals who used College Hill as a launching pad, and who are championing new ideas, challenging old conventions, pushing boundaries, and, in doing so, advancing their professions.

Writer Steve Orlando ’08 started trying to break into comics when he was 12. What he lacked in superpowers he made up for with talent, perseverance, and networking. Orlando built contacts and a reputation for his work at DC Comics, and in 2014 he found himself in an office with an editor who posed an enticing question: If you were going to create comic books that reimagined DC characters, which would you pick?

“And that’s when I finally got to say Midnighter,” says Orlando, a fan since the character first appeared in a comic book in 1998. Orlando was drawn to Midnighter in part for his bedrock confidence in who he was. Midnighter is Batman, only fun and without the pathos, Orlando says. And Midnighter is gay.

It was a bucket-list achievement when DC picked Orlando to write the series that revived Midnighter in 2015. The books were well received; The Advocate touted him as “the first gay male superhero to headline a series from a mainstream publisher.” GLAAD, a nonprofit that advocates for fair and accurate LGTBQ representation, nominated Midnighter for one of its annual Media Awards.

Unapologetically casting himself as a fighter, not a hero, Midnighter pays no attention to what anyone thinks about his vigilantism, his turbocharged violence, his sexuality, or anything else. “Do I look like a guy who cares what people know about him?” he asks a date during dinner and drinks, moments before he saves the day when bloody mayhem erupts in the restaurant.

For context, Orlando points out that when Midnighter, originally created by writer Warren Ellis and artist Bryan Hitch, came on the scene, one of the best-known gay characters in popular entertainment was Jack from the Will and Grace TV series — a character criticized in some quarters as a stereotype.

“So to have this person that subverted those expectations and was so different from other types of representations of gay male characters, it just goes to show that there’s no one way to be gay. And that takes a lot of the pressure off, you know?” says Orlando, who is bisexual. 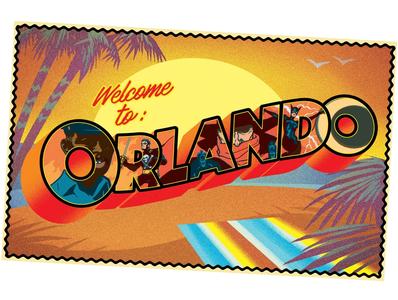 The computer in Midnighter’s brain instantly calculates every possible outcome of a fight so he always knows how it will end. Midnighter always wins, and he’s never been victimized. Orlando says that’s one reason why Midnighter resonates with gay audiences.

“If you think about it, if you are a queer viewer or a queer reader then you’re like, ‘Well, we’ve got Brokeback Mountain,’ but one of them gets murdered at the end of it. And that’s all we’ve gotten for decades and decades and decades. And that was a big push of Midnighter — well here we don’t die at the end,” he says.

In Orlando’s first Midnighter book, the fighter/hero has broken up with the love of his life, Apollo, and is dating with gusto. Comic books had portrayed gay male relationships before, but the characters tended to quickly become married and chaste, which was easier for a segment of the audience to accept, Orlando says. He wanted the confident Midnighter to be single and “sex positive.” Still, true love prevailed. Orlando and DC followed up the Midnighter series by reuniting the lovers in a miniseries, Midnighter and Apollo.

Midnighter was a springboard for Orlando’s career, and he’s been busy since with major projects for DC. But he still prizes Midnighter. The best part is hearing from someone who’s picked up a Midnighter book and found in it an experience that mirrored his own. “Everybody deserves to know a hero can be like them,” Orlando says.

They're Writing the Playbook