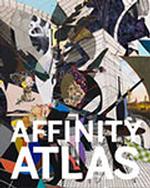 Reflecting the teaching museum’s mission of object-based learning, the Wellin’s inaugural exhibition, Affinity Atlas, brings together new and iconic works of art in various media, as well as scientific and ethnographic objects, some on loan and others selected from the collection, to suggest ways that visual art can connect and expand on ideas across disciplines.

One grouping in the exhibition probes the mysteries of the cosmos, juxtaposing nineteenth-century scientific prints of solar flares by Isaac Hollister Hall with Demetrius Oliver’s contemporary orrery—an abstract, three-dimensional model of the solar system made from suspended umbrella spokes and studio scraps. Another collection of objects, which includes a trompe l’oeil installation of a crumbling wall and disintegrating painting by Valerie Hegarty and a kaleidoscopic animated video by Chris Doyle, explores the natural world and references the work of nineteenth-century Hudson River School painters. Other works on view include paintings by Marsden Hartley and Charles Burchfield, prints by Jasper Johns and Kiki Smith, and new works by Terry Winters and Ruby Sky Stiler. Two large-scale photographs from Brazilian artist Vik Muniz’s series Pictures of Junk, which were featured in the Academy Award–nominated documentary Waste Land, are on view alongside London-based artist Hew Locke’s eighteen-foot-tall tapestry Chariots of the Gods and Sara VanDerBeek’s epic, four-part photographic response to Detroit, first featured in the Museum of Modern Art’s exhibition New Photography 2009.

The Wellin Museum has commissioned artists Max Galyon, Aaron King, and Johannes VanDerBeek to collaborate on a site-specific installation that plays on the design of the museum’s visible storage and builds on the artists’ ongoing dialogue as collaborators. This work also takes its inspiration from the American front lawn as a site where disparate objects are displayed and displaced by the passage of time. The artists have arranged seemingly unrelated works-many specifically made for the exhibition-in close proximity to create a landscape where the identity of each object must be carefully reconsidered. In addition, the Wellin Museum has commissioned artist Michael Oatman, based in Troy, New York, to create a new work. Spurred by the artist’s childhood memories, the collage includes thousands of small details that reveal a story of technological and social advances throughout the artist’s lifetime.