Images courtesy of the Ruth and Elmer Wellin Museum.

Once I had a better understanding of the history of the objects, and once I had answered my questions of how the Cypriot objects came to the Wellin and who had excavated them, I turned to the objects themselves. When I first encountered them, they were spread out across the tables in the Wellin’s Seminar Room. Upon examining the works, I found the immense range of objects to be quite striking. The objects featured vastly different stylistic elements, were made of different materials, and had a wide range of functions. In addition, some seemed to be from the second millennium B.C. while others appeared to from the second millennium A.D. While at first I was perplexed at this great disparity, I soon came to understand why this was. Throughout its ancient history, Cyprus was invaded and occupied by numerous peoples including the Assyrians, Persians, Greeks, Egyptians, Romans, and Byzantine settlers due to its strategic location bridging the Mediterranean and the Near East. Each culture is represented in the archaeological record of the island, and the collection at the Wellin is highly representative of this diverse history. The second half of this blog series will highlight several objects in the collection and will explore their place in the ancient history of Cyprus.

One of the earliest objects in the Wellin’s collection is a Mycenaean stirrup jar. Around 1100 B.C., the Mycenaeans began settling on Cyprus during the island’s Bronze Age as a result of the Dorian invasion on mainland Greece. At their height of power on the island, the Mycenaeans established ten cities along the coast of Cyprus and profoundly influenced Cypriot culture. Either imported or produced directly on the island, the stirrup jar at the Wellin features three black bands around the body of the vessel, a black band around the shoulder of the jar, two handles, a painted, out-turned lip, and an open mouth. It was likely produced during the twelfth century B.C. While some stirrup jars were more ornately decorated, many were rendered simply with linear designs such as the one at the Wellin. They were originally used as containers and usually stored wine or oil.

This post is the sixth part of a series about the origins and history of the Wellin’s recently acquired collection of Cypriot antiquities. For part one, visit https://www.hamilton.edu/wellin/wellinformed/unpacking-the-past

An interview with Julia Jacquette with the online food magazine GOOD

Unpacking the Past: Adventures in the Hamilton Archives

Behind the Scenes of a Summer Student Assistant

"What Can Art Do?": Teaching and Learning in Yashua Klos: OUR LABOUR

Developing OUR LABOUR: Behind the Scenes with Alexander Jarman 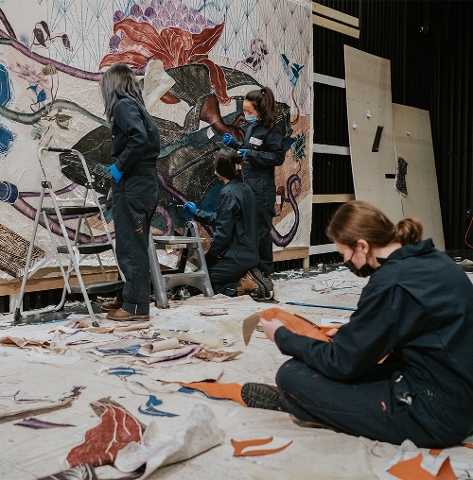 Reflections from the Student Mural Assistants