Jeffrey Gibson: This Is the Day 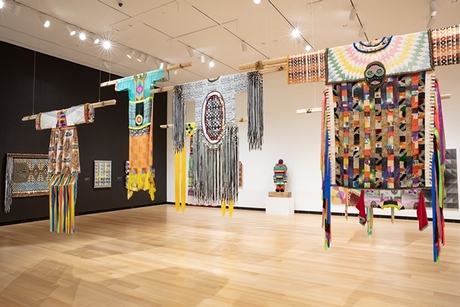 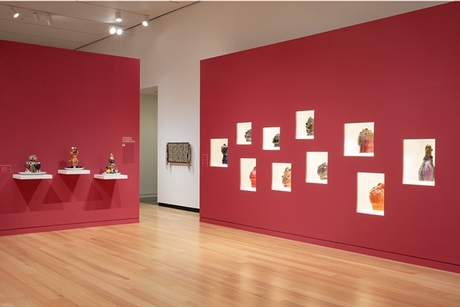 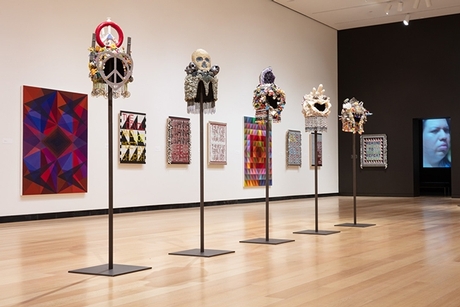 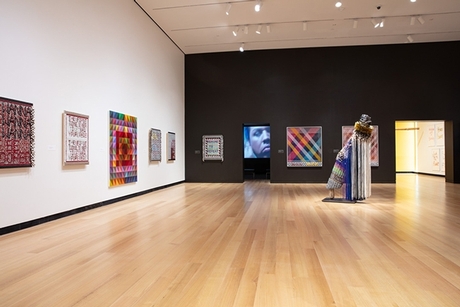 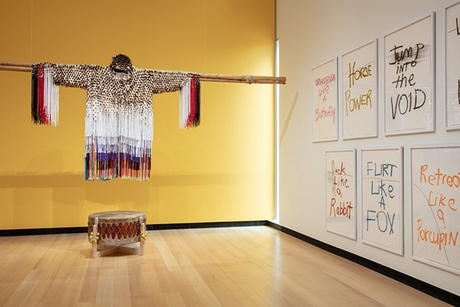 Jeffrey Gibson’s multidisciplinary practice encompasses a wide range of mediums and draws on a variety of influences and visual languages to comment on race, sexuality, religion, and gender, among other topical issues. Combining popular and queer culture with references to Native American history and current events, Gibson reflects on his Choctaw and Cherokee heritage as a means of exploring the significance, traditions, and rituals of personal adornment and identity.

This Is the Day features a series of embellished garments and helmets created for the exhibition that probe the layers of meaning and potential power presented through the ritual of dress. Also debuting is the video I Was Here, an original time-based work commissioned by the Wellin Museum that investigates the intersections between community and individuality, gender and identity, and notions of performance and ritual. These new pieces are presented alongside a large selection of works created between 2014 and 2018, demonstrating the depth and breadth of Gibson’s oeuvre. Often combining beadwork, fringe, and jingles associated with Native American powwow rituals with lyrics from hit songs from the 1980s and 1990s—such as “dearly beloved” and “hold me now”—Gibson blends a multitude of materials and references in an eclectic and celebratory mash-up.

Although his mediums and inspirations are diverse, Gibson notes that all his work originates with painting. The layering of color and glazes, the crisp low-relief lines defining geometric shapes, the synergy between form and internal color relationships—all work together to create a kind of legend for understanding Gibson’s work as a whole. Emanating from his painting practice are the impressionistic ceramics that reference prehistoric Mississippian head pots; the embellished punching bags, robes, tapestries, figures, and panels that riff on powwow attire; the weavings with their tensile fringe and layered color effects that nod to the tradition of non-objective painting; the garments and helmets that escalate the notion of adornment; and the video I Was Here, which brings documentary and magical realism together in an expansion of the artist’s work in the medium. Combining disparate influences and sensibilities, Gibson invites us to share in the hope and possibility that the differences that define us can also unite us.

Jeffrey Gibson (b. Colorado Springs, 1972) grew up in major urban centers across the United States, Germany, Korea, and England. He received a BFA from the School of the Art Institute of Chicago in 1995, and an MA in painting from the Royal College of Art in London in 1998. His work has been featured in solo museum exhibitions at the National Academy Museum (2013), the Oklahoma Contemporary Arts Center (2017), and the Denver Art Museum (2018). Recent group shows include Prospect.3: Notes for Now in New Orleans (2015), Greater New York at MoMA PS1 (2016), and Desert X in Palm Springs (2017). Gibson is the recipient of the Joan Mitchell Foundation Painters and Sculptors Grant and the Creative Capital Foundation Grant. He is an artist-in-residence at Bard College and lives and works in Germantown, New York.

This exhibition was organized by the Ruth and Elmer Wellin Museum of Art and will travel to the Blanton Museum of Art at The University of Texas at Austin, where it will be on view July 14 – September 29, 2019.

Architects + Artisans | Jeffrey Gibson: This Is the Day

Hyperallergic | Best of 2018: Our Top 20 Exhibitions Across the United States

OUT Magazine | The Many Fibers of Being