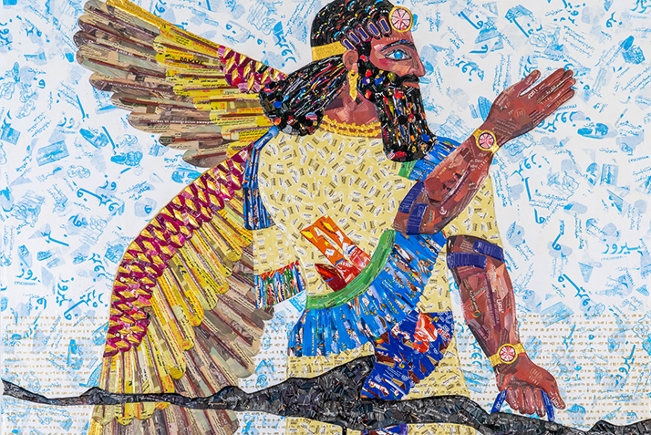 The ancient Assyrian city of Nimrud (located near Mosul in present-day northern Iraq) has fascinated Westerners in the years since its “discovery” and subsequent excavation, between 1845 and 1851, by British archaeologist Austen Henry Layard. Recently, Iraqi-American visual artist Michael Rakowitz (born New York City 1973) has turned to Nimrud’s hallmark, the Northwest Palace, constructed by Ashurnasirpal II between 883 and 859 BCE, in his ongoing effort to complicate the narrative around cultural patrimony, especially as it pertains to the Middle East.

For Michael Rakowitz: Nimrud, the Wellin Museum has commissioned the artist to re-create one of the palace’s rooms—Room H, as designated by archeologists. Part of a reception suite, the room was originally lined with seven-foot-tall carved-stone reliefs, including winged male figures and a long inscription detailing the king’s many achievements. In the mid-nineteenth century, many of the reliefs were shipped down the Tigris River and were acquired by private collections and public institutions throughout the Western world, such as the British Museum, London; Musée du Louvre, Paris; Museum of Fine Arts, Boston; Brooklyn Museum; Yale University Art Gallery, New Haven; and numerous small liberal arts colleges in the northeastern United States, including Hamilton College (a stele entered the Wellin’s collection during that period). For the exhibition, Rakowitz has re-created only those panels that were in situ in Room H when the remains of the palace were destroyed by the jihadist group the Islamic State (ISIL or ISIS) in 2015. Areas from which the reliefs had already been removed by archaeologists are left blank, resulting in what Rakowitz calls “a palimpsest of different moments of removal.”

To make his colorful reproductions of the ancient carved-stone reliefs, Rakowitz uses packaging for food products imported from the Middle East to the U.S. and sold in local bodegas in Chicago, where the artist lives and works. This material references the panels’ original bright colors while acknowledging, particularly in the inclusion of modern Arabic writing, the current-day Middle Eastern populations that exist both in and outside of Iraq, in the diaspora. Room H—one of several the artist has made to date with the goal of eventually re-creating the entire palace—is part of an ongoing series entitled “The invisible enemy should not exist.” (The name of the series is a literal translation of Aj-ibur-shapu, the main processional avenue of ancient Babylon.) Accompanying Room H at the Wellin are small-scale sculptures from the same series, which the artist began in 2007 and continues to expand upon. The sculptures replicate artifacts stolen from the National Museum of Iraq in Baghdad after the U.S. invasion in April 2003—an event Rakowitz considers a global tragedy on account of the loss of an important shared heritage. The artist has begun to call these sculptures “reappearances” rather than reconstructions, “mutants” rather than simply replacements of the originals.

In various series created over the last twenty years, Rakowitz has presented physical objects and their representations (from ancient artifacts to imported dates) as a metaphor for the displacement of Arabs and their attendant culture, especially in periods of political conflict. Past projects have explored this issue in the contexts of World War II, the Six-Day War, and the Iraq War, for example. Addressing themes such as the fraught relationship between preservation and destruction, the nature of authenticity, and historical archaeological practices that have filled museum storerooms throughout Europe and the U.S., Rakowitz reacts not only to our present moment but also to the centuries, if not millennia, of looting of ancient sites—both legally sanctioned and illegal, often occurring in times of foreign occupation. His work implicates the museum as a colonial entity and calls attention to the perverse mission of preserving damaged and incomplete objects, arresting their function and immobilizing their context.

Rakowitz is Professor of Art Theory and Practice at Northwestern University. He received a bachelor’s degree in visual arts from Purchase College, State University of New York, in 1995 and a master’s degree in visual studies from the Massachusetts Institute of Technology in 1998. Exhibitions of his work have been organized by the Malmö Konsthall, Sweden (2019); Whitechapel Gallery, London (2019); and the Museum of Contemporary Art, Chicago (2017). In 2018 Rakowitz was awarded the commission for a public project on Trafalgar Square’s Fourth Plinth, where he displayed his re-creation—made from cans of Iraqi date syrup—of an ancient Assyrian lamassu figure that was destroyed by the Islamic State in 2015.