“Michael Rakowitz: Nimrud,” the Wellin Museum of Art’s exhibition that opened in October, focuses on the loss of Iraq’s art and cultural wealth via colonization, archaeological exploration, and war. The centerpiece of the exhibition is the re-creation of Room H of the Northwest Palace of the ancient Assyrian city of Nimrud (Kalhu), constructed between 883 and 859 BCE, first excavated between 1845 and 1851 and thought to have included nearly 200 rooms.

Commissioned by the Wellin, Room H displays reproductions of the 7-foot, ancient carved-stone reliefs, including winged male figures and an inscription detailing the ruler’s achievements, that lined the walls. In his re-creation, however, Rakowitz displays only the portions of the panels remaining when the palace was destroyed by the jihadist group ISIS in 2015. 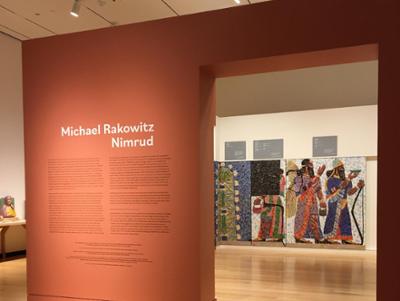 Areas from which portions of the reliefs had already been removed by 19th-century archaeologists are left blank, resulting in what Rakowitz calls “a palimpsest of different moments of removal.” Nearly 400 of the 600 Assyrian reliefs were removed and acquired by private collections and public institutions throughout the Western world. 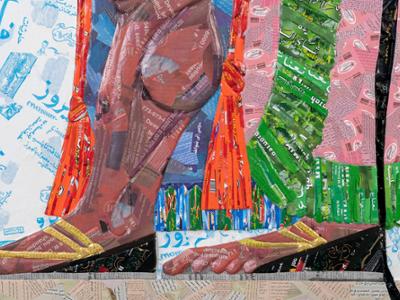 To make his vivid reproductions of the reliefs, Rakowitz uses Arabic-language newspapers and packaging for food products imported from the Middle East to the United States and sold in Middle Eastern grocery stores in Chicago, where he lives and works. This material references the panels’ original bright colors while acknowledging, particularly in the inclusion of modern Arabic writing, current-day Middle Eastern populations that exist both in and outside of Iraq.

Accompanying Room H is a selection of 43 never-before-exhibited small-scale sculptures that replicate artifacts stolen from the National Museum of Iraq in Baghdad during the U.S. invasion in April 2003, an event Rakowitz considers a global tragedy. Rakowitz calls the sculptures “placeholders for the Iraqis whose lives cannot be reconstructed,” observing that the valuation of the objects lost was not applied to the Iraqi people who were casualties of the same w 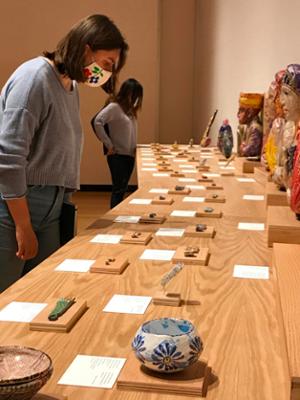 According to Isha Parkhi ’21, who along with Emma Berry ’22 had the opportunity to arrange the objects on a display table, “The artifacts range from funerary busts to scrolls, all of which are marked as stolen, looted, or at risk, to date. Rakowitz and his studio have reappeared over 900 of such artifacts, but that is still only a fraction of the objects that remain missing.”

These sculptures are also sheathed in food wrappers that “can’t tell you where they are really from. The labels hide their provenance, like immigrants who can’t tell you where they are from,” said Rakowitz, referring to the fact that products from Iraq sold in the U.S. may bear the name of the country in which they are labeled rather than the country from which they originate.

Assistant Curator of Exhibitions & Academic Outreach Alexander Jarman has worked with many faculty members this semester who have introduced aspects of the exhibition into their classes. Classes have ranged from Architecture and Politics to Principles of Social and Cultural Anthropology to Art of Devotion: Visual and Material Culture of Islam to Environmental Conflict.

“By recreating the monuments and artifacts that have been removed and stolen from the region, [Rakowitz] confronts the reality of this removal and the loss it evinces,” Wellin Museum  director Tracy Adler said. “As a teaching museum, the Wellin aims to have difficult and timely conversations, and to complicate the narrative around what it means to societies when their identities are disassociated from the spiritual and cultural artifacts that define them.”

Rakowitz is a professor of art theory and practice at Northwestern University. The exhibition is curated by Katherine Alcauskas, former collections curator and exhibitions manager at the Wellin.

The exhibition is accessible this semester only to the Hamilton community by appointment. It will close on June 18, 2021.