Hamilton College performing arts events have gone virtual for the 2020 season. Please join our email list to get the latest information.

World Premiere by the choirs of Bryn Mawr, Hamilton, Haverford, and Swarthmore Colleges 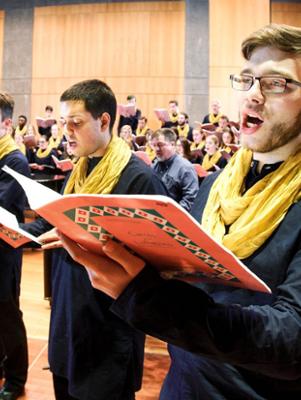 Twenty/Twenty is a collaborative, covid-era work for choir and digital video in which singers from the choirs of four colleges act as authors, videographers, and performers in the world premiere of a newly-commissioned work by composer Scott Ordway (Rutgers University).

At the start of the fall semester, nearly one hundred singers from all four colleges were asked to complete the sentence “One year ago today, I did not know that...” Ordway then compiled their responses into a final text and completed the composition. Each singer prepared six recordings.

For the visual element, the singers were given a series of eight prompts for which they could shoot original footage or submit videos they had shot at some point during the year. In all, students submitted nearly 1,600 audio and video files which were processed and edited by Ordway with Frankfurt-based engineer Alexander Brusencev and two research assistants from Rutgers University.

The idea of connection in a time of isolation was also an inspiration to composer Scott Ordway: “Through this project, we have formed a large community of musicians and designed a structure through which we can directly collaborate with one another in ways that would have been unimaginable just a few months ago.”