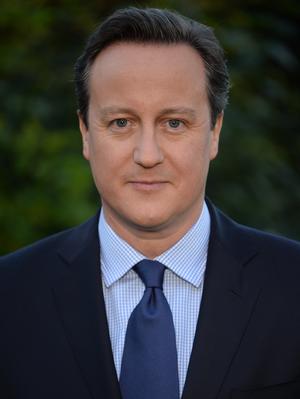 The Right Honourable David Cameron, Former Prime Minister of the United Kingdom (2010-2016), will be Hamilton College’s next Sacerdote Great Names speaker on Monday, Oct. 15, at 7:30 p.m. The program is free and open to the public, although tickets are required.

Cameron is the second British Prime Minister to speak as part of the Sacerdote Series. Margaret Thatcher appeared at Hamilton in 1999.

David Cameron served as Prime Minister from 2010 to 2016, leading Britain’s first coalition government in nearly 70 years and, at the 2015 general election, forming the first majority Conservative government in the UK for more than two decades. In doing so, he became the UK’s youngest Prime Minister since Lord Liverpool in 1812 and, in 2015, the first-ever British Prime Minister to increase both his party’s share of the vote and their number of seats in the House of Commons, having already served a full term as premier.

Cameron came to power in 2010 at a moment of economic crisis and with an unprecedented fiscal challenge. Under his leadership, the UK’s economy was transformed. The deficit was reduced by over two-thirds; one million businesses were set-up; a record number of jobs were created (1,000 extra jobs for every day he was Prime Minister); and Britain became the fastest-growing major advanced economy in the world. That created the stability Cameron needed to cut taxes, introduce a national living wage, transform education, reform welfare, protect the National Health Service, and increase pensions. The number of families on welfare fell; the number of students attending university – including those from disadvantaged backgrounds – increased rapidly; and the number of people employed was higher than at any previous point in British history.

Internationally, Cameron developed a foreign policy in the post-Iraq era that addressed the new challenges of the Arab Spring, as well as a more aggressive Russia, while ensuring that Britain played a full role in the global fight against ISIS. Under his leadership, Britain built a strong partnership with India and became China’s preferred partner in the West. Throughout, he championed Britain’s special relationship with the United States, working closely with President Barack Obama.

Cameron hosted the successful London 2012 Olympic and Paralympic Games and chaired the 2013 G8 Summit in Northern Ireland, where he highlighted the global need for fair taxes, increased transparency, and open trade. He also co-chaired a UN high level panel for two-years that developed and agreed the Sustainable Development Goals.

Cameron championed environmental issues with the aim of delivering the greenest ever government –he grew the British economy while carbon emissions fell sharply; created the world’s first green investment bank; and ensured that the UK played a leading role in the successful Paris Agreement on climate change. Under his leadership, the UK committed to the NATO two-percent defense spending target and a rising national defense budget.

Despite Cameron arguing that Britain was stronger, safer, and better off inside the European Union, in June 2016, the British people voted to leave the EU. Following this defeat, he resigned as Prime Minister and leader of the Conservative Party, leaving 10 Downing Street on July 13, 2016. In September 2016, he resigned as a Member of Parliament.

Cameron had been a Member of Parliament for the rural constituency of Witney in West Oxfordshire from 2001. Before he became a Member of Parliament, he worked in business and government. He was educated at Eton College and Brasenose College at Oxford University, studying Philosophy, Politics and Economics (PPE) and gaining a First Class Honours degree. After graduating, he joined the Conservative Research Department where he worked for Prime Minister Margaret Thatcher and her successor John Major. He held other senior government positions and spent seven years at Carlton Communications, one of the UK’s leading media companies.

Since leaving 10 Downing Street, Cameron has continued focusing on issues he advanced while in office. He is Chairman of Patrons at National Citizen Service (NCS), the UK’s flagship youth development program, and is President of Alzheimer’s Research UK, Britain’s leading medical research charity with special focus on funding bio-medical research into the cause, prevention, and cure of dementia.

Continuing the instrumental role he took while Prime Minister advocating UN Sustainable Development Goal 16, he has been working with the London School of Economics and Blavatnik School of Government at Oxford University, chairing the LSE-Oxford Commission on State Fragility, Growth, and Development, under the auspices of the International Growth Centre.