Jewels in the Crown

While every book in Burke Library features treasures of its own, the holdings in Special Collections and Archives are the library’s gems. Three major collections anchor the department: the Beinecke Collection on the Lesser Antilles; the works and papers of poet Ezra Pound, Class of 1905; and imprints by and about American communal societies. Director and Curator Christian Goodwillie refers to these collections as “world-class” and is working to improve and expand them; Goodwillie wants to make the three collections among the “best of their kind.” Special Collections and Archives also houses 56 incunabula (books printed prior to 1500) and materials on religion, classics, local history, the Adirondacks and Civil War regimental histories.

The Beinecke Lesser Antilles materials date largely from the 16th to 19th centuries; the collection features 50 maps, plantation records, and oil paintings and watercolors. Walter Beinecke, Jr. donated the foundation of the collection to Hamilton, and the College has continued to add to it. The Ezra Pound archive holds more than 10,000 pieces, including a nearly full set of first editions, a study collection of all of Pound’s printed works in different editions and languages, photographs and business documents. Pound and members of his family donated many of these documents.

Goodwillie describes the communitarian collection as the “biggest and broadest collection” of its kind “that exists anywhere.” Twentieth-century societies are very well represented, including the Rajneeshpuram and Kerista communities. The College is the sole repository of audiocassettes of the Kerista’s “gestalt-o-rama” group criticism sessions.

Enjoy some of the highlights of the collections. 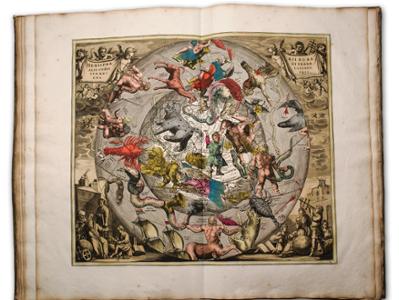 Andreas Cellarius wrote Harmonia Macrocosmica as both a celestial atlas and a historical overview of the cosmological theories of Claudius Ptolemy, Nicolaus Copernicus and Tycho Brahe. First published in 1660 by Johannes Janssonius in Amsterdam, there were subsequent editions in 1661 and 1666, and it was reprinted in 1708. Professional astronomers immediately criticized the Harmonia Macrocosmica for its inaccuracies, although it was valued for the beauty of its colored double plates.

The plate (above) and a detail (top of page) depict the constellations as seen from the northern hemisphere.

‘Planting the Sugar Cane’ from Ten Views of the Island of Antigua, 1823

The English introduced slavery in their West Indian colonies in the late 17th century. The labor of African slaves was essential for turning sugarcane into a lucrative cash crop. Planters did not share the wealth, however, and slavery in the West Indies was particularly brutal; death rates often outpaced birth rates.

William Clark drew the original drawings for “Planting the Sugar Cane.” Thomas Clay, a London publisher, produced a folio of 10 of Clark’s “views” in 1823. The title page described them as “From Drawings Made by William Clark, During a Residence of Three Years in the West Indies, Upon the Estates of Admiral Tallemach.” Clark left little evidence of himself other than these images. He was probably a plantation overseer or manager.

“Plan of the Dwelling, Works” was part of an agent’s report to the absentee owner, Mr.?Gordon. The Antiguan plantation was as self-sufficient as possible, including fields, slaves’ houses, barns and a windmill to mill grain.

Ezra Pound, Class of 1905, is famous for his modernist poetry and infamous for his politics. Pound left America for Europe in 1908, first living in London, then leaving England in disillusionment after the tremendous casualties of World War I. He came to embrace Italian culture, including Benito Mussolini’s fascism. Pound made radio propaganda broadcasts during World War II that criticized the United States, leading to his arrest for treason after Mussolini’s defeat in 1945.

When he was arrested, Pound grabbed this one-volume edition of The Four Books of Confucian thought and a small Chinese-English dictionary and put them in his pocket. Pound’s work had long been influenced by the clarity and rigor of Chinese and Japanese poetry. He removed several Chinese characters from The Four Books to place in the Pisan Cantos, which he began writing while imprisoned. The Pisan Cantos were, in part, a meditation on Confucianism, and Pound believed the characters provided a better expression of Confucian ideals than he could approximate with the English alphabet.

Gift from the Egypt Exploration Society

Egyptians manufactured papyrus, an ancient precursor to paper, as far back as the third millennium BCE. They cut the pith of the papyrus plant, Cyperus papyrus, into long strips, layering the moistened strips and compressing them together. The resulting sheet was dried, then polished.

While archaeologists have found evidence of the oldest papyrus in Egypt, its use spread throughout the Mediterranean region. Papyrus is best suited to very dry climates. Molds can quickly weaken and destroy it under moist conditions. While used in Europe, papyrus fared badly in damp weather. Parchment, made from animal skins, ultimately replaced papyrus in Europe in the first centuries BCE and CE. Papyrus remained common in Egypt until paper, introduced by the Arabs, supplanted it sometime in the 12th century.

Alexander Hamilton’s relationship with the College goes back to its origins. Hamilton supported Samuel Kirkland’s 1793 proposal to create a school for the children of the Oneida Indians and white settlers and served as one of the school’s founding trustees. The Hamilton-Oneida Academy became Hamilton College in 1812 when it received the third college charter granted in New York State. 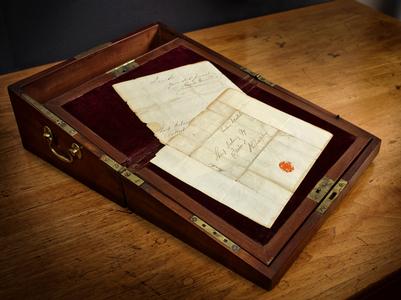 According to family sources, Hamilton composed works on this Spanish mahogany desk that are still studied today, including his essays for The Federalist Papers and his draft of President Washington’s Farewell Address. Hamilton and co-authors James Madison and John Jay wrote The Federalist Papers to drum up support for the Constitution in 1787 and 1788. In Federalist No. 1, Hamilton posed the central question behind the radical new republican government: “whether societies of men are really capable or not of establishing good government from reflection and choice, or whether they are forever destined to depend for their political constitutions on accident and force.” 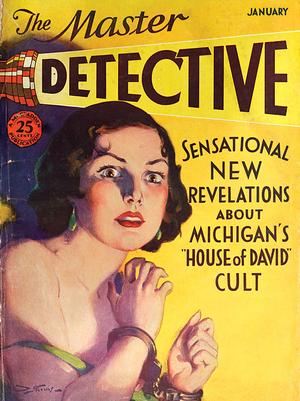 Mary Purnell and her husband Benjamin founded the Israelite House of David community in Benton Harbor, Mich., in 1903. The Israelites were neither Jews nor Gentiles, but believed their mission was to gather the elect from the 12 tribes of Israel to prepare for the Second Coming. The Benton Harbor Israelites were celibate vegetarians and, following Old Testament practice, the men cut neither their hair nor their beards. After Benjamin’s death in 1927, the group split, and Mary led her followers to form a new colony, Mary’s City of David, in 1930.

The House of David embraced popular American culture, forming a jazz band, sending out traveling baseball and basketball teams, and running an amusement park. The flag in Mary’s portrait signaled their allegiance. Despite the group’s patriotism, they were a target for the pulp press. Master Detective magazine was happy to pillory their “free love” philosophy, ignoring the fact that the Israelites were pledged to celibacy.

The Nuremberg Chronicle was a printer’s triumph — one of the first books to integrate text and illustrations and, for its day, a best-seller with five editions produced within eight years of its introduction in 1493. Hartmann Schedel, a native of Nuremberg (now in Germany) wrote the first text in Latin, but a German edition came out in 1496.

Schedel divided this history of the world from creation to his own times into seven parts or ages. The first five ages preceded the birth of Christ; the sixth age encompassed the birth of Christ to the reign of the Holy Roman Emperor Maximillian I, which had just begun when the book was printed. The Antichrist’s rule in the seventh age would end with the Last Judgment. The Chronicle combined biblical perspective with Schedel’s interest in medicine and science, adding a tour of the highlights of the known world through some of its illustrations.

Artists Michael Wohlgemut and Wilhelm Pleydenwurff created the original plates. Their studio specialized in woodcuts and sculptures prior to the commission; after their work on the Chronicle, they shifted their focus to the emerging field of book illustration. They worked with the Chronicle’s first printer, Anton Koberger, an early publishing powerhouse. His business produced roughly 250 titles by 1500; employed more than 100 typesetters, printers and assistants; and had room for 18 printing presses.

The trial convicting Chester Gillette for the murder of his pregnant lover Grace Brown created a newspaper sensation and inspired Theodore Dreiser’s novel An American Tragedy and the movie A Place in the Sun. Gillette, hoping to make a financially advantageous marriage, had refused to marry Brown, a poor factory worker. In July 1906, Gillette took Brown to the Adirondacks, perhaps encouraging Brown’s hopes for an elopement. On a rowboat on Big Moose Lake, Gillette killed her on July 11. A jury did not believe Gillette’s claim that Brown had committed suicide and sentenced him to death. In 1908, Brown was executed in Auburn Prison in Auburn, N.Y.

Gillette’s grandniece Marylynn Murray donated this diary, which Gillette had written in prison awaiting trial, to Hamilton in 2007. The diary includes letters from Brown to Gillette and documents from the trial.

The Book of Common Prayer, Printed in London, 1787

The simple inscription inside this prayer book belies a complex history.  Joseph Brant, whose Mohawk name was Thayendanegea, was the son of Native American parents who had converted to Christianity. Brant received his education at Moor’s Indian Charity School, where he met Samuel Kirkland before Kirkland began his missionary activities in Central New York. Brant was an excellent scholar and translated several Christian texts into Mohawk.

Brant returned home after his schooling, rising to become a Mohawk leader. In 1775, he traveled to England and met with King George III to barter better protection for Mohawk land claims in exchange for allegiance to the crown. Brant allied the Mohawk with the British during the American Revolution, joining the majority of Native American tribes. After the war he moved to a Mohawk reserve in Ontario, Canada. Despite Brant’s Loyalist allegiance, he remained friends with Kirkland. In 1788, Brant presented Kirkland with this translated Book of Common Prayer. 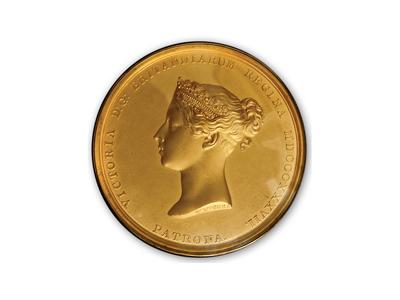 Edward Robinson’s extraordinary career commenced with his graduation from Hamilton in 1816, valedictorian of the College’s first four-year graduating class. Robinson both studied biblical texts and explored the lands in which they were written.

Robinson left desk and libraries behind in 1838 to explore Palestine. He and his traveling companion, the Rev. Eli Smith, found the sites of many biblical events. Among their discoveries were the remains of the tunnel Hezekiah dug to protect Jerusalem from the Assyrian siege of the city in 701-02 BCE. The Royal Geographical Society awarded its gold medal to Robinson in 1842 in recognition of the scholarship that resulted from this trip. Robinson and Smith returned to Jerusalem in 1852 to continue their work. Robinson’s Arch in the Old City of Jerusalem is named in his honor. 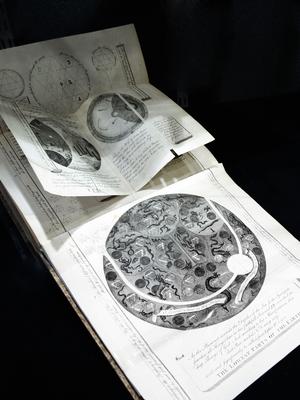 Seventeenth-century German theologian Jacob Bohme leavened his Lutheran doctrine with mysticism. His writings espoused mystical visions, and he took the then-radical position of asserting that salvation could be achieved through works, not solely through faith. The Religious Society of Friends (Quakers) and other communitarian groups adopted elements of Bohme’s beliefs.

The English cleric William Law encouraged the publication of an English-language edition of Bohme’s work. Prototype “pop-up” books, these volumes contained engravings (based on the originals by Bohme’s follower Dionysius Andreas Freher) with sheets that could be folded back to reveal the layers beneath. This image illustrated the relationship between humanity and the divine order of the universe: Human nature reflects the heavenly spheres in microcosm.