The Hill in History

Hamilton’s King of the Forgers 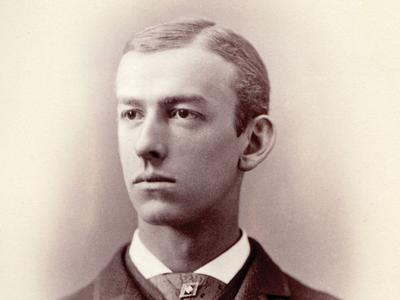 Alonzo Jay Whiteman, Class of 1881, will not be remembered as one of Hamilton’s most distinguished graduates. Nevertheless, published reports of his illustrious career as a con man who may have swindled as much as $5 million throughout his lifetime consistently mention his four academic years in Clinton, New York.

What turned this Dansville, N.Y., son of a wealthy businessman into what the Pinkerton detectives described as “the ablest criminal then in action in the United States” remains a tale to be explored. “Lon,” as he was called, is the subject of a story about his local exploits by Carl Carmer, Class of 1914, in Dark Trees to the Wind (1949). Articles in The New York Times, San Francisco Call and Auckland Star (New Zealand) report Whiteman’s some 47 arrests and but two convictions. His “modus operandi” consisted of altering the amounts of drafts, signing the names of others to such instruments (forging) and drawing checks on nonexistent accounts. One of the most common schemes was known as “check kiting.” That took advantage of accounts at two different banks, drawing a check on one, depositing it in another and making a withdrawal before it was learned that the first account was empty.

Of Hamilton interest is Carmer’s tale of a gambling night in a Utica hostelry where two professionals planned to relieve the rich freshman of some of his extra coin. Instead, to their surprise, Whiteman consistently drew better poker hands, relieving the notorious gamblers of some $3,000. Only when they turned over the deck to discover six aces did they recognize his connivance. When they threatened, he pulled pistols and marched them downstairs to a fine meal at his expense.

At Hamilton, Whiteman resided in South College (which stood on the site of present-day South Residence Hall) and was a member of the Delta Kappa Epsilon fraternity. He wrote for the literary magazine, was a prize orator, sang in a quartet and managed the baseball team. He spent a short time at Columbia Law School, although, like his classmate Theodore Roosevelt, he didn’t remain the requisite time to receive a degree.

Before embarking on his criminal activities, Lon stood to inherit a fortune upon his father’s death in 1886. He had moved to Duluth, Minn., where his father owned considerable property, including some of the ore rich Mesabi Range. Although the son began as a bank teller, he soon was investing his inheritance in valuable timberlands. He became active politically, serving consecutive two-year terms in the Minnesota State Senate. A Democrat, he lost a 1892 run for Congress. Records show that the College awarded him a master’s degree in 1885 and at one point may have mentioned him as a possible candidate for College trustee.

The handsome Eastern-educated bachelor attracted the interest of prosperous Duluth businessmen — and their daughters. As one of several law cases reported in the state and federal volumes, Atwater v Whiteman, the parent of his “intended” sued for false representations as to the value of land Whiteman sold her. Although the case turned on jury instructions about damages, Lon lost the case and the bride. Further, in a New York case, a woman named May Clarke claimed that Lon had married her and fathered a child. While admitting her acquaintance, he denied all else. Whiteman did marry Julia Nettleton, “daughter of a prominent Duluth pioneer family,” in 1889. They had a son, Frederick, born in 1892. The 1900 Duluth census records show Julia as a widow residing with an 8-year-old son at her parents’ home. (As one observer surmised, perhaps that is the best identification if one’s spouse is a wanted fugitive.)

Much of Lon’s voluminous civil litigation resulted from the terms of his father’s will. He and his mother, Rebecca, were co-executors. He and his younger sister Clara received only modest bequests. The widow was given a life estate terminable upon her death or remarriage, in which event the children were to receive the residue. In a reported case, Clara was accused of bribing a man to marry her widowed mother, thereby getting her hands on at least half of the remaining fortune.

A judgment creditor of Lon challenged a complicated property transfer between the siblings in order to recover against him. He requested the court to vacate deeds executed by Clara, who was married to Alfred J. Gibbs. The creditor lost both in state court and on appeal to the federal courts (Perkins v Gibbs et al). By this time Clara had become a resident of a Wisconsin insane asylum, where she died many years later — quite a reversal of circumstances for the family of upstanding millionaire Reuben Whiteman. But then, he had always settled his wife Rebecca’s account with local shops when she “forgot” to pay.

A Life of Crime 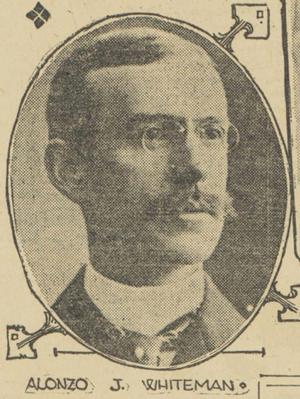 Lon’s illegal escapades appear to have become his way of life after his political defeat in the 1892 election. He actively supported President Cleveland’s bid for a second nonconsecutive term, hoping perhaps for a patronage reward. However, soon he found himself in trouble at the local social club where he was known to pay off gambling debts with bad paper. (A colleague in gambling there was former Hamilton contemporary Robert J. Knox, Class of 1880.) So Whiteman left Duluth around 1893 seeking better luck at the Chicago card tables and wheat markets.

Back east, he was accused of forging a signature to pay off a lost wager at the Monmouth Race Track in New Jersey. The American Banking Association used the Pinkerton Agency to track down those committing crimes against its members. Whiteman usually avoided the grasps of that private agency. The Pinkertons, father and son, seemed to have made a career of tailing the elusive Whiteman, who frequently took refuge in his hometown of Dansville, where his neighbors defended him consistently against the unofficial law enforcement.

One story has Lon escaping through a rail car window while being escorted by officers to Buffalo for trial. Another time he convinced Dansville neighbors, including a church pastor, that he was present in the community despite the fact that he was purportedly passing forged checks in New York City, a day’s train ride away. He accomplished this by having a merchant write an incorrect date on a receipt and by learning everything said in a public talk given on an evening when he was actually miles away. According to a story in The DEKE Quarterly, his successful defense was provided pro bono by a fraternity brother. Toward the end of his career of crime, with his aged mother he joined a Midwestern cult of “flat-world believers,” passing himself off as an evangelist and, not surprisingly, making off with the collection.

The formerly handsome millionaire’s son became ill after spending time in several New York prisons. Afflicted with epilepsy, his palsied hands could no longer forge signatures. He became a middleman for younger criminals. According to a long article in the Auckland Star dated March 8, 1918, he was caught trying to return for a reward bonds stolen by others. Along with Knox, the article reported that he was wanted in London and Mexico City. He received two years in the Atlanta federal prison. After release, he died in Georgia in 1921.

Observers of the flamboyant Whiteman often remarked on his elocution and writing style. He gave speeches in Dansville, where he stayed with his mother while living off the country’s financial institutions. He often used his legal training to defend himself. And, of course, the excellence in written and spoken word reflected those uniquely required courses at Hamilton in 1880 — and in the 1950s when I was a student.

William S. Easton ’58 is a retired attorney living in Port Huron, Mich. He has written for historical magazines in Michigan and is a regular contributor for a regional monthly newspaper.