Rush Cady of Rome, N.Y., Class of 1862, was one of about 225 Hamilton College alumni who served in the Union Army during the Civil War, most of them as officers. (At least 11 served with the Confederacy.) Cady left college before graduating from Hamilton, joining the 97th Regiment of the New York State Volunteers. His letters home to his family provide a valuable first-hand account of one soldier's view of war; together with other documents related to his wartime service, they are preserved and available online in the digital collection of the Hamilton College Library.

In a letter to his sister sent from camp in Warrentown Junction, Va., on July 4, 1862, he wrote earnestly that:

The march of Progress has always been through bloody battle-fields, & is so now.— Good men have always fought to maintain & defend great principles. Good governments cost blood & treasure in the founding & also the preservation. The individual man is but a tool for the promotion of the progress & welfare of the whole race.

But on a less exalted note he added:

Cherries have been exceedingly abundant, ever since I came,— the whole camp has been supplied; they grow wild, both red & black, & are as good as ours, though not as large. I have had all the cherries I cared to eat, & they have done me good. We frequently have cherry pie; a baker in our Co. makes them for us; I got three — very nice cherry & lemon pies of him yesterday, two are left. Vendors are around Company day with sweet milk, buttermilk, pies (mostly blackberry) rusk biscuits, &c. About a week ago, we began to get blackberries, & now they are plenty; it dont take long to fill a haversack, or a patient pail.

In letters home, he liked to include pencil sketches of the places he passed on marches and pressed flowers he picked en route.

After surviving the first and second battle of Fredericksburg, his unit was engaged on the first day of the battle of Gettysburg, July 1, 1863, in the fighting near what today is labeled Reynolds' Woods. He was rallying his men in the face of Confederate attack when a ball passed through his right arm and lodged in his body. He lingered for more than three weeks, dying July 24. His body was embalmed and returned to his hometown of Rome for burial. His obituary in the local newspaper of the day, The Roman Citizen, declared:

He entered Hamilton College in the spring of 1859. In that Institution, as we have reason to know, he maintained a fine order of scholarship, and firm, Christian character. Would that for our sakes, who to-day mourn his loss, he could have remained and graduated; but in that whirlwind of patriotic enthusiasm which swept over the land in '61, he felt impelled to leave the quiet shades of Hamilton and volunteer for his country's defence.

Cady was one of two Hamilton alumni known to have died at Gettysburg; Henry Porter Cook, Class of 1863 and a sergeant-major in the 126th New York State Volunteers, died on July 2, 1863. All told, 19 Hamilton alumni died in battle or in prison, in an era when classes averaged about 30 students. An unknown number also died of sickness during their service. 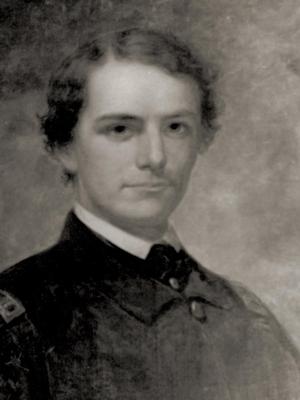 Another Hamiltonian — among the first to enlist following the start of the war — fell at the Battle of Fredericksburg. William Kirkland Bacon, Class of 1863 and a great-grandnephew of Hamilton-Oneida Academy founder Samuel Kirkland, left Hamilton at the completion of his sophomore year to join up as private. By December 1862 he had been promoted to adjutant (first lieutenant) of the 26th ­Regiment of New York State Volunteers. He took part in the assault on the Confederate stronghold of Marye's Heights in the Battle of Fredericksburg on December 13 and was one of 8,000 Union casualties that day. As reported to Bacon's parents by John Sheean, a private in the regiment:

WILLIE BACON, the Adjutant, had one of his legs taken off, while gallantly leading on his regiment, loading and firing his rifle as fast as any man in the crowd. He cheered on his men all the time until he fell."

Bacon's leg was amputated in a field hospital, and three days later he died of his wound. 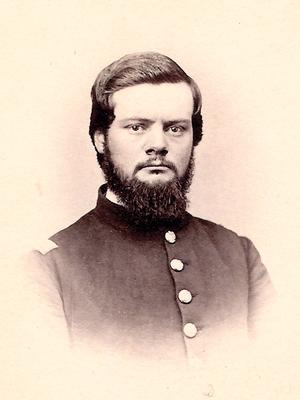 Two Hamilton alumni received the newly created Congressional Medal of Honor for gallantry in action during the Civil War. The first was Morris Brown, Jr., a member of the Class of 1864, who enlisted in 1862 in the 126th New York Volunteers and by the following summer was a captain commanding the regiment's Company A. On July 3, 1863, the 126th was part of the Union forces holding Cemetery Ridge at Gettysburg against Pickett's Charge. Morris led his company on a flanking action against the Confederates, capturing 50 of the enemy along with the colors of the 28th North Carolina Regiment. For that action he would be awarded his Medal of Honor. But it would come posthumously, for he died in action in Virginia on June 22, 1864, while leading another charge against the enemy. The second Medal of Honor went to Charles M. Holton, Class of 1863, a captain with the 7th Michigan Cavalry, who also fought at Gettysburg. At the Battle of Falling Waters, on July 14, 1863, Capt. Holton and his men were part of a Union attack on the rear guard of General Robert E. Lee's army as it prepared to cross the Potomac into Virginia, capturing the colors of the 55th Virginia Infantry Regiment, for which he was awarded his medal. Holton survived the war.

Excerpted from a forthcoming ­history of Hamilton College by Maurice Isserman, the James L. Ferguson Professor of History, to be published in conjunction with the College's bicentennial in 2012. The Bicentennial will be marked during the sesquicentennial of the Civil War, 2011-2015.