Last Saturday’s International Student Festival – a rousing celebration of food, culture, geography, art, and more food for hundreds of students, faculty, and staff – was followed on Sunday by a tasty sampling of offerings from restaurants owned by or employing refugees at the Refugee Food Festival.

The Fillius Events Barn was filled to capacity with exhibits representing Bhutan, China, Columbia, Ethiopia, France, Italy, Japan, Korea, Nepal, Pakistan, Russia, Sudan, and Sweden and the U.S. territory of Puerto Rico on March 31. Students from these countries as well as students whose parents came to the United States from one of these countries offered plentiful desserts as well as a broad range of more substantial fare including spicy Korean noodles, Columbian tostones and maduros, Pakistani pakora, and Russian potato salad. The event was not limited to food but featured photo displays of the countries, maps, traditional clothing, and crafts.

I loved that throughout the event, people were asking questions and taking time to learn about a new culture, and these are conversations that I hope our community will continue to have, even after this event.

“This event was planned with the goals of bringing the community together, providing the campus with a fun and educational event, and giving a space for students to embrace their cultural background, whether it is their country of origin or country of heritage,” said organizer Jiin Jeong ’21, a native of South Korea. “I loved that throughout the event, people were asking questions and taking time to learn about a new culture, and these are conversations that I hope our community will continue to have, even after this event.

“Planning for such an event was a bigger task than I anticipated, but it was incredible how willingly people extended their help … and it was fulfilling to see the organizers and guests enjoy themselves. Next year, I would like to have even more countries represented.” 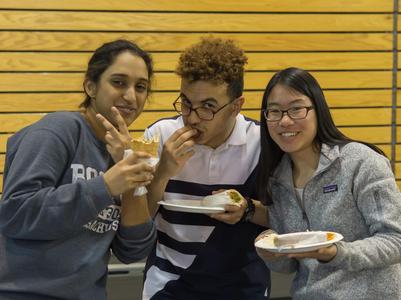 Sunday’s event was strictly about food from Utica restaurants including Minar, Hummus and Tabbouleh, Tarik’s Bakery, Joel’s Spanish Food, and Lucy’s Market. More than 100 students, faculty, and staff enjoyed an evening’s meal together. All proceeds will go to the UNHCR, the United Nations Refugee Agency.

The event was the first of Refugee Solidarity Month organized by On the Move, Hersheena Rajaram, and Professor of Economics Erol Balkan. Upcoming events include: