Included in the $400 million goal, which is more than double any previous fundraising campaign, are $120 million for student financial aid, $108.6 million to support student learning and living, and $61.4 million to establish digital fluency as a foundational skill for all Hamilton students. The College is also seeking to raise $25 million to provide students with more opportunities for original research, internships, and civic and community involvement, and $15 million to begin renovations and expand facilities for the humanities.

Most alumni will participate in the campaign through gifts to the Hamilton Annual Fund, which will account for the balance of the goal. The campaign will conclude on June 30, 2023.

“It’s an ambitious goal,” said President David Wippman. “The good news is that Hamilton has already received gifts and commitments exceeding $191 million. That’s more than the total received during the Excelsior campaign, which had been the most successful campaign in the College’s history.”

Trustees Jeff Little ’71 and David Solomon ’84 are chairing Because Hamilton. It is the fourth consecutive campaign for which Little has held a leadership position.

“I do this for Hamilton because I believe in the College and what it accomplishes for students,” Little said. “These are critically important priorities for Hamilton. Achieving the campaign’s objectives will make a Hamilton education even more accessible, vibrant, and relevant.”

Solomon, the new chief executive officer of Goldman Sachs, said he agreed to serve as the campaign co-chair because Hamilton gave him the skills to succeed in his career. “I attribute much of my success to my time at Hamilton,” he said. “It served as the foundation for all I’ve achieved today. This is an opportunity to give back to the College that gave so much to me.”

“Hamilton is one of the finest colleges in America,” Solomon added. “But we can do more for our students. Our history has been characterized by a constant desire to improve, to always get better. And given our record for graduating alumni who make a difference – whether it’s on the world stage, or in their local communities – we must continue providing our students with opportunities that prepare them to be leaders, no matter their path in life.” 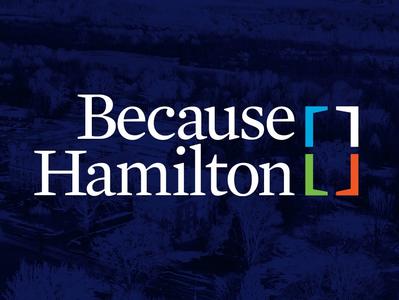 Wippman said the campaign’s six priorities were identified following a year-long strategic planning process that sought input from students, faculty, staff, and alumni. They were chosen from a broader list of options that sought to strengthen and differentiate a Hamilton education, and further increase access to talented and deserving students, regardless of their financial circumstances. The six priorities are:

Financial aid is the campaign’s top priority. In 2010, Hamilton became need-blind in admission, which means a family’s ability to pay for their child’s education would no longer be a factor in the College’s admission decisions for U.S. students considered for fall admission. Since that time, the College’s annual spending on financial aid has increased from $25 million to $44 million, and the percentage of Pell grant recipients in the entering class has gone from 9 percent to 19 percent. New endowed funds earmarked for financial aid will enable Hamilton to continue enrolling the most deserving students.

The College is also seeking to raise funds to address the hidden needs of students once they arrive on campus. Examples include a flight home to be with an ill parent, an unexpected medical or dental bill, expenses for an overseas class trip, or appropriate clothes for a job interview. Wippman said such needs can be stressful disruptions to students whose financial barriers are significant.

The Because Hamilton campaign is also seeking funds to establish new learning and living communities to enhance students’ experiences on campus. These include renovations to student residences and to create a new residential neighborhood; a new, integrated system of advising that combines academic, career, and student life advisors into a coordinated network for each student; new programs and facilities focused on health and well-being; the continuing renovation and expansion of athletics facilities; and further development of the Common Ground program, which brings together people from diverse backgrounds to exchange ideas from different perspectives.

Digital technologies and modes of thinking are changing society. As part of the Because Hamilton campaign, Wippman said the College will seek funding to hire additional faculty members and technologists with expertise in this emerging field, and to establish a new digital learning hub and research incubator that will provide support for faculty and students to create, share, and explore digital learning and research. “The goal is to graduate students who are liberally educated but also understand digital modes of thinking and communicating,” Wippman said.

Experiential learning often complements the concepts taught in the traditional classroom with the hands-on application of theory and knowledge in the laboratory, studio, community, or workplace and helps position students for success after college. These opportunities include original research, internships, and civic and community involvement, all of which are necessities for students starting their careers. Because many of the most coveted internships are unpaid or in markets that are so expensive, students are unable to pursue these opportunities without additional resources. Because Hamilton will ensure all students, especially those with financial need, have the requisite skills to engage in career preparation, build networks that lead to successful outcomes, and develop self-confidence and marketable life skills.

The humanities are the heart of a liberal arts education and essential to a democratic society. The facilities in which these disciplines are taught at Hamilton currently lack adequate spaces for students to study and collaborate with their professors and each other, faculty offices that accommodate small group discussions and interaction, and flexible classrooms conducive to a range of teaching styles. The Because Hamilton campaign will complete the renewal of academic facilities that was begun at the turn of the century and has thus far addressed needs in the sciences, social sciences, and the arts. This new effort includes a renovation and modernization of existing humanities facilities to address issues of pedagogy, safety, and comfort, and new spaces to put the humanities on equal footing with other academic divisions.

Hear about the incredible work that David Shaye ’02, Gretchen Morrison Grad ’85, and Arthur Williams ’16 are doing to build a better world, to empower communities, and to improve health and foster peace.

Most alumni will participate in Because Hamilton through annual gifts to the Hamilton Fund, which provides current income and immediate benefits that go directly to the operation of the College. Hamilton graduates support their alma mater at a rate that is among the top 1 percent of all American colleges and universities, said Lori Dennison vice president for advancement. Through the campaign, gifts to the Hamilton Fund can be designated to one of six priority areas: scholarship aid, academic programs, the career center, athletics, the arts, or where the College determines the need is greatest.

“Hamilton’s philanthropic culture and the impact these priorities will have on our students’ education make me confident the Because Hamilton campaign will be successful,” Dennison said.