Alumni have two fellow alumni to cheer for as they watch this year’s Academy Awards presentation on Sunday, March 4. Yance Ford ’94 directed Strong Island, one of the nominees for best documentary (feature). Andrew Metz ’91 was the managing editor for Abacus, also nominated in the same category.

In its description of Strong Island, the Academy wrote, “In 1992, William Ford, Jr., a 24-year-old African-American man preparing to become a corrections officer, was shot and killed by a white mechanic during a dispute. The murder, for which the killer was never convicted, tore apart the Ford family, which still wrestles with their grief and anger decades later.”

Ford screened his film and discussed the making of it with the campus community in September. The Alumni Review also recently profiled Ford and Strong Island, describing it as “a beautifully photographed, heart-breaking film that puts viewers face-to-face with the Ford family’s grief and places the homicide and its aftermath within the context of this country’s continuing history of racial injustice. The movie makes a case that, as William’s parents believed, the police made their son the prime suspect in his own slaying even though he was unarmed.”

On its website, the Academy wrote that Abacus tells the story of the only U.S. bank to face criminal charges, Abacus Federal Savings Bank, the first Chinese-owned bank in New York's Chinatown, following the financial crisis of 2008. “Founded by immigrant Thomas Sung in 1984 and now run by him and his American-born daughters, the bank was accused of mortgage fraud in a legal battle that spanned five years.” 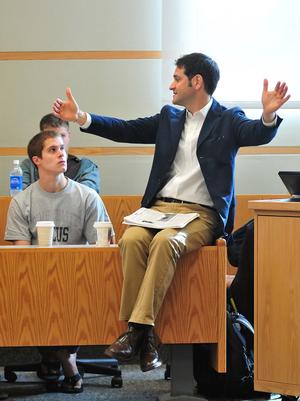 Metz, the film’s managing editor, is PBS’s FRONTLINE Managing Editor. According to FRONTLINE’s website, “With Executive Producer Raney Aronson-Rath, he oversees the editorial mission for FRONTLINE, working with journalists to develop and produce original stories, reviewing reporting for all FRONTLINE’s programming and helping to manage collaborations with the series’ journalism partners.

“Throughout his career in journalism, he has been a foreign and national correspondent, local newspaper reporter and television producer. Between 2006 and 2013, he worked at the CBS program, 60 Minutes, where he was a frequent producer for Lesley Stahl, as well as other correspondents on the broadcast. … Prior to 60 Minutes, Metz spent about a decade at the New York newspaper, Newsday, where he reported extensively from Gaza, the West Bank and Israel on the violent conflict between Israel and the Palestinians.”

Metz visited Professor of Economics Erol Balkan's class in 2010 where he spoke about his career in journalism.