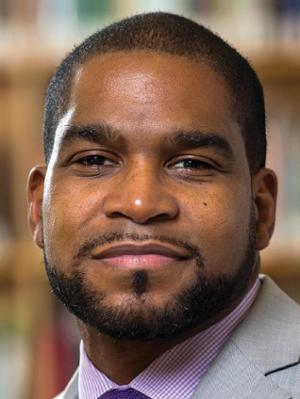 Melvin Rogers, a political science professor at Brown University, will deliver the Constitution Day lecture at Hamilton College on Monday, Sept. 18, at 7:30 p.m., in the Red Pit, KJ. The lecture, titled “Democratic Faith: Thomas Jefferson, the People, and Early Black Politics,” is free and open to the public.

Rogers works broadly in the areas of political philosophy and the history of American and African American political thought. His research is driven by a set of connected concerns: the value of John Dewey’s political philosophy for democratic life; the character necessary to sustain and nurture democracy, especially as derived from the African American political and moral philosophical tradition; and the ways this character directs our attention to those who have been historically excluded and dominated and helps explain their allegiance to American society amid political alienation.

Rogers is the author of The Undiscovered Dewey: Religion, Morality, and the Ethos of Democracy and a related editorial project, John Dewey, The Public and Its Problems. His new edited project is titled Race and the Imagination in African American Political Thought.

The lecture is sponsored by the Government Department.