Articles by Director and Curator of Special Collections and Archives Christian Goodwillie were recently published in the journal Communal Societies and in Early American Life magazine. 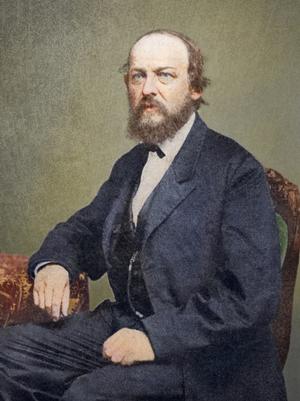 Bennett’s Descent from the Shaker Feast Ground” is featured in the current issue of Communal Societies, a publication of the Communal Studies Association.

The article traces Bennett’s experiences among the Shakers, particularly his role in, and documentation of the New Lebanon Shakers’ first meeting on the Holy Mount, where they communed with spirits and angels, in 1842.

Bennett later left the Shakers and became one of the 19th century’s foremost advocates for free thought and atheism. He was persecuted and jailed for his beliefs. Despite his apostasy, the Shakers remained his friends until his death, and supported him through his battles with the moral authorities.

The article draws on research conducted by Goodwillie and his friend Joscelyn Godwin on the symbolic paintings created for Upstate New York Masonic Lodges prior to 1830 for the instruction of initiates to the first three, or “blue,” degrees of Freemasonry.

The paintings, which Goodwillie calls treasures of American folk art, are remnants of a time when rural Upstate New York was an important center in the development of the western esoteric tradition through Freemasonry.