Hamilton is Top Fulbright Producer in the Last Decade

Hamilton is one of only nine institutions that have been top producers of U.S. Fulbright students every year for the last 10 years. The other top-producing institutions include Amherst, Oberlin, Pitzer, Pomona, Smith, Swarthmore, Vassar, and Williams colleges. Nine students from the College received and accepted Fulbright awards for academic year 2019-20. Another student received and declined his award.

The U.S. Department of State’s Bureau of Educational and Cultural Affairs announced the top-producing institutions for the Fulbright Program, the government's flagship international educational exchange program, on Feb. 10. The Chronicle of Higher Education published the lists.

For 2019-20, Hamilton Fulbright scholars and English Teaching assistants traveled to Mexico, Brazil, Argentina, South Korea, Spain, Kenya, Taiwan, and Columbia. For 2020-21, 18 of 26 applicants have been selected as semifinalists, including 17 seniors and one alumnus from the Class of 2015.

Fulbright grants appeal to students across disciplines and a broad range of interests. The grantees have certain things in common — they have taken advantage of many opportunities at Hamilton.

The Fulbright competition is administered through Student Fellowships Coordinator Ginny Dosch. Professor of History Doug Ambrose and Associate Professor of Russian Studies John Bartle have comprised Hamilton’s Fulbright committee with Dosch for almost 20 years. “Hamilton students are fortunate to have Doug and John — their support, insight, assistance, humor, and the continuity of their commitment to the Fulbright process at Hamilton,” Dosch said. Ambrose was a Fulbright scholar to Croatia from 2012 to 2013. 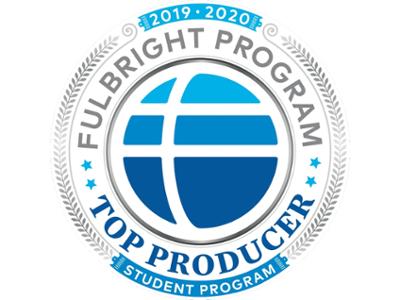 “I encourage students interested in study, research, or teaching English outside the U.S. to consider the unmatched opportunities offered through the Fulbright program,” Dosch said. “Fulbright grants appeal to students across disciplines and a broad range of interests. The grantees have certain things in common — they have taken advantage of many opportunities at Hamilton, including conducting research with professors, participating in career-related internships, studying abroad or away, working on independent projects, and engaging in co-curricular activities on campus and in the community. They have the experiences, skills, and confidence to study, conduct research, or teach English abroad.”

“We are delighted to see that the colleges and universities we are honoring as 2019-20 Fulbright top-producing institutions reflect the geographic and institutional diversity of higher education in the United States,” said Marie Royce, assistant secretary of state for educational and cultural affairs. “These Fulbrighters serve as citizen ambassadors for the United States in their host communities, and we will benefit from the skills, knowledge, and global connections they build on their exchanges long after they return home.”

The Fulbright Program was created to increase mutual understanding among people of the United States and those of other countries. The primary source of funding is an annual appropriation made by the U.S. Congress to the U.S. Department of State’s Bureau of Educational and Cultural Affairs. More than 2,200 U.S. students and 900 college and university faculty and administrators are awarded Fulbright grants annually. In addition, some 4,000 Fulbright foreign students and visiting scholars come to the United States each year to study, lecture, conduct research, or teach their native language.