In the email below sent to the Hamilton community on Sept. 11, 2015, President Joan Hinde Stewart announced the death of Editor Emeritus Frank Lorenz. A memorial service celebrating his life will be held in the College Chapel on Monday, Sept. 28, at 11 a.m.

Dear Members of the Hamilton Community,

Frank first came to Hamilton in 1965 as an instructor, but after earning his M.L.S in 1972 he returned as head reference librarian. In 1983, he joined the Communications and Development Office as editor of College publications, while working part time as Hamilton’s archivist. During his time on College Hill, Frank became Hamilton’s unofficial historian. Even as technology blossomed around him, Frank always seemed to know more about Hamilton and its history than any hard drive could capture.

Although he retired from full-time employment in 2002, Frank remained a presence on College Hill. Several weeks ago, he was in the office preparing memorial biographies for the next issue of the Hamilton Alumni Review, a publication that he edited for 18 years, becoming editor emeritus in 2002. A distinguishing feature of Hamilton’s alumni periodical, Frank’s thoroughly researched biographies are loving tributes to Hamilton graduates.

In the last issue Frank edited, his friend Matt McCullough ’44 wrote: “Discipline and elegance in thought and deed, meticulous scholarship and a fair, even-tempered, innately helpful personal outlook have typified Frank’s editorship and are reflected in the quality found throughout the Review. He is, in short, a credit to his profession and a great credit to the College.” Another article about Frank appeared in the spring 2013 issue of the Review. 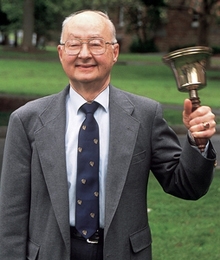 In 2003, the Alumni Association bestowed on Frank its highest honor, the Bell Ringer Award, for serving as “a dear and close friend for many Hamiltonians, and a respected colleague among your co-workers, who constantly marvel at and rely on the accumulated knowledge you have for your adopted alma mater.”

Frank’s co-workers were also his family, and we will miss him greatly.