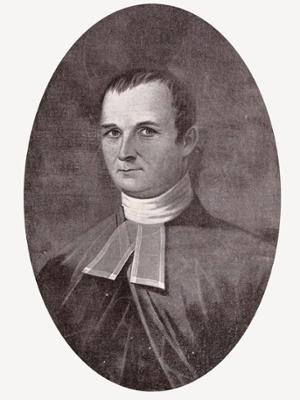 Had Reverend Samuel Kirkland, the founder of the Hamilton-Oneida Academy in 1793, discovered the secret to immortality, he would have been 275 years old on December 1.

Hamilton College, the successor of the academy, will mark Kirkland’s birthday with an “Alex Talk” by Maurice Isserman, the Publius Virgilius Rogers Professor of American History at Hamilton and author of On The Hill: A Bicentennial History of Hamilton College.

The talk will take place on Thursday, Dec. 1, at 4:15 p.m. in the Kirner-Johnson Building, Room 102. It is free and open to the public, and will be streamed live. Prior to the presentation, guests are welcome to visit Kirkland’s home, which years ago was restored and moved from the bottom of College Hill to the Hamilton campus.

Isserman describes his talk this way: “Missionary, educator, patriot, sustained by faith and family, Samuel Kirkland endured years of hardship and self-sacrifice on a raw frontier, torn by war and revolution.  He deserves the respect and gratitude of all who study and work at Hamilton College, his legacy and gift to succeeding generations.”

In 1793, Kirkland was a missionary to the Oneida Indians. He presented his “Plan of Education” to President George Washington, who “expressed approbation,” and to Secretary of the Treasury Alexander Hamilton, who consented to be a trustee of the new school, to which he also lent his name.

The Hamilton-Oneida Academy was established soon thereafter to educate Oneida children alongside those of the white settlers streaming into the region. Nineteen years later, in 1812, the academy was rechartered as Hamilton College. Kirkland died in 1808 and is buried in the College’s cemetery.

One year before the bicentennial observance of Hamilton College’s founding in 1812, Isserman published On the Hill: A Bicentennial History of Hamilton College 1812-2012. He is also the author of Continental Divide: A History of American Mountaineering and The Other American: The Life of Michael Harrington, and is co-author of Fallen Giants: A History of Himalayan Mountaineering from the Age of Empire to the Age of Extremes, America Divided: The Civil War of the 1960s and Cronkite’s War: His World War Two Letters Home.

A member of the Hamilton faculty since 1990, Isserman received his bachelor’s degree from Reed College and his master’s degree and Ph.D. from the University of Rochester.

Alex Talks are short presentations with opportunities for questions. They feature the expertise of Hamilton’s faculty and other members of the community. The talks are streamed live and archived.