Teaching her intro to biology and intermediate genetics courses, Assistant Professor of Biology Natalie Nannas would find herself waving her hands a lot, and it wasn’t to capture her students’ attention.

Both courses are based in DNA. “There are several processes that DNA do that really help get us from our genes to what we look like,” Nannas says. “And it’s hard to explain these processes to students because so often we see them on paper and in two dimensions; really the process is three-dimensional, and it’s happening in our cells all the time. So I find myself sort of waving my hands a lot and trying to draw things that are three dimensional but in two-dimensional space.” 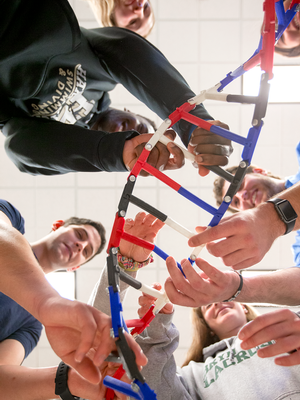 No more of that for Nannas, who collaborated with Hamilton instructional designer Doug Higgins to create a flexible plastic DNA model using a 3D printer. Higgins is a member of the Research & Instructional Design Team, part of Library and Information Technology Services.

The twistable DNA model he designed is just over five feet long, lightweight, and pulls apart in ways that allow Nannas to show students a variety of processes. The only DNA models Nannas could find on the market were rigid and static.

“There’s a lack of digital technology for the undergraduate level in molecular biology and genetics,” she says. “A lot of times they are surface-level, like videos and animations. They’re not deep, immersive technologies or ways of understanding material because I don’t think there’s been any investment in that kind of digital development.”

Nannas initially had approached the design team to discuss creating a DNA virtual reality instructional tool, which was a great idea for what she wanted to do, Higgins agreed. As they talked about her teaching needs, a secondary idea emerged: the twistable DNA model. “We like to collaborate with a professor to meet the overall outcome, with the focus on the teaching and learning and research over the tool,” Higgins says.

He got to work on the model and took a prototype to Nannas for her to try. She provided feedback, they swapped suggestions, and in the end came up with a model that helps students get a handle on DNA. “When I have the model up there and I’m pulling it apart, it makes things a little more approachable. The students ooh and aah. They are willing to raise their hands and say, ‘I don’t know why that’s happening,’” Nannas observes.

Digital technology and modes of thinking are changing the world and Hamilton prepares its graduates to work effectively in this new environment.

The model is adaptable. At Nannas’ request, Higgins created a new component used to illustrate a breakthrough genetics technique, CRISPR, which allows scientists to modify any genome in any organism with great precision. In November, a Chinese scientist made the controversial announcement that he used CRISPR to create genetically modified babies.

“It’s going to be so important and such a part of everybody’s life that I’m glad we’re investing in students’ ability to understand this technology through digital learning,” Nannas says.

The ideas are continuing to flow for Nannas and Higgins, who have talked about printing a number of small DNA models that students could each use during labs. As for the VR concept that initially brought her to the team, Nannas is working on that with 3D Technology Specialist Ben Salzman ’14 and Andrew Groll ’19. The intention is to design a VR environment in which students can wear a headset to manipulate DNA molecules in 3D.