In the trapeze world, performers usually specialize in flying or catching, and women most often fly, but Keira Moore ’06 made a different choice. She is a 5-foot-tall flier who learned to catch.

“At the professional level, huge men do the catching, but at the teaching and school level, there are more and more women who are now learning to catch and proving that they are just as capable of doing that as the male staff,” she says. “So that was always a big goal of mine — to prove my worth on the catching end.”

“I feel like this is what I need to be doing right now. I need to get out and see the world. I need to try this out. I need to change my life.”

Clearly, Moore does not fear untraditional moves. After earning a doctorate in behavior analysis in 2015, she walked away from her job in that field a year later to teach and perform as a trapeze artist.

“I feel like this is what I need to be doing right now,” Moore remembers telling her boss. “I need to get out and see the world. I need to try this out. I need to change my life.” She considers that to be the best decision she ever made. Since then, she’s toggled successfully between both her careers.

As a behavior analyst, Moore specializes in children’s sleep disorders, in particular children who have autism. “I really enjoy doing it because it’s something where you can have a lot of success really quickly in helping people address a really difficult problem,” she says.

Her interest in working with autistic children began during her semester of study in Hamilton’s program at the highly regarded New England Center for Children. Moore loved the challenge and the physical activity of working with the kids. “I’m not great at having a desk job and sitting behind a computer. I need some action, adrenaline, and moving around throughout my day,” she says.

Her best friend, Meggie Ito ’06, also did the semester at the center, and the two moved in tandem for years. After graduating from Hamilton, they both took jobs at the center, earned master’s degrees in behavior analysis, and became neighbors in Boston. To help them relax when they were stressed-out grad students, Ito bought them Groupons for lessons at a trapeze school. “We started going back a couple times a week, and before we knew it, we were spending all of our money there,” Moore says.

She and Ito both became serious about the sport. When the trapeze school offered to train and hire Moore as an instructor, she accepted. She put so much time into the trapeze she took two extra years to finish her doctorate.

“The circus community is a very unique group of people, as you might expect. But they are the kindest, most giving, accepting, open-minded, and worldly sort of people. It was the community that really drew me into it, and I’ve met some of the best friends that I have ever had.”

“I was never as passionate about actually flying and doing flying trapeze as I was about teaching it and being a part of that community,” she says. “The circus community is a very unique group of people, as you might expect. But they are the kindest, most giving, accepting, open-minded, and worldly sort of people. It was the community that really drew me into it, and I’ve met some of the best friends that I have ever had.”

Meanwhile, she earned her doctorate, then she worked herself up the ranks as a behavior analyst to take a job creating a home-service program for a company in Boston. But it was a day job. Moore grew dissatisfied tied to a desk with little contact with clients. In 2016, her boss let her take a three-month sabbatical to teach trapeze for a summer. He wasn’t surprised when she called to say she wasn’t coming back.

Ito, ever a kindred spirit with Moore, supported her career turn. “I thought that was great. I thought she should go and explore and try not to get hurt. I totally get the mindset of wanting to dive into something that’s brand new and pursue a skill that not everyone’s doing,” Ito says. 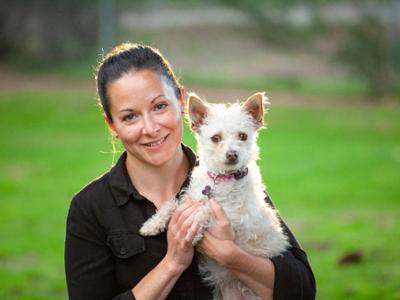 About the time Moore quit her day job, Ito, too, was looking for a change. She left her job teaching high-needs students to work with young people in another way. “I ended up working at a rock-climbing gym, and I ran their summer camp and did all their weekend programming and eventually got into climbing myself,” Ito says. She remains a serious climber and she still flies, sometimes with Moore.

When Moore left her behavior analyst job, she moved to Seattle, where she met the man, also a trapeze artist, who became her boyfriend. With Seattle as a homebase, they taught and performed locally and abroad. They moved to California, taught in London, and traveled around Europe. They resettled in California just before the pandemic hit.

With the trapeze world frozen, Moore devised a way to restart her analysis career that would hold her interest — lots of variety, no stodgy routine. She works with children on sleep problems; teaches in an online master’s program, supervising a few students; writes content for a couple of different companies; and conducts webinars and training.

Read about other alumni who are making an impact in their professions and communities throughout the world.

“I’d love to get back to teaching flying trapeze (and catching students) again at some point in the not-too-distant future and hopefully doing some recreational flying, but I think my performing days may be behind me now,” she says. “Who knows what life holds next though?”

It might involve animals. Ever since Moore was a kid, she’s wanted to work with them. “So I’m hoping something exciting will come my way that involves animal training next,” she says.