The 2016 presidential election, the Broadway musical Hamilton, financial aid, the Federal Reserve and interest rates, career placement and diversity issues: these were topics for which the national media sought interviews and quotes from Hamilton experts.

Highlighting Hamilton as a college willing to ensure the availability of accurate data, The New York Times interviewed

for an article titled Concealing the Calculus of Higher Education in January.

“We don’t ever want there to be barriers in front of students who are considering Hamilton,” Feist explained as he described the college’s financial aid website and its linkages to available resources.

Beginning in January and continuing throughout the year, the media referenced presidential candidate Bernie Sanders’ stint as a visiting professor at Hamilton in the spring semester 1990.

Professor of Sociology Dennis Gilbert, who worked with Sanders on his congressional campaign, was quoted about Sanders occasionally and penned an essay about working for him for The Huffington Post.

The announcement of President Joan Hinde Stewart’s retirement spawned multiple articles. In January, Fixing a higher education ‘caste system’ that screams inequality: Help us find answers, an article written by Hechinger Report editor Liz Willen, referenced an interview with President Joan Stewart and highlighted measures that expanded access and diversity at the college as a result of its need-blind admission policy.

Ann Owen, the Henry Platt Bristol Professor of Economics, was interviewed a half dozen times on the NPR programs Marketplace and Here & Now throughout the year on the state of the economy and the possible impact of Federal Reserve decisions.

Likewise, Maurice Isserman was queried numerous times by various outlets including Reuters wire service on the similarities and differences between the 1968 and 2016 political seasons. His most recent book, Continental Divide – A History of American Mountaineering, was widely reviewed by publications including The New York Times, The Wall Street Journal and Publishers Weekly, among many others.

This year’s commencement speaker, Peter Thiel, was of particular interest to the media, especially because of his support, as a Silicon Valley entrepreneur, for then presidential candidate Donald Trump.

Various portions of his address were referenced throughout the summer by the national press including Fortune, PBS Newshour, Money, Bloomburg and The Huffington Post.

Dean of Faculty Patrick Reynolds received a bit of national attention as well along with Ernest Williams, the William R. Kenan Professor of Biology emeritus, related to commencement. Williams' study of the speed with which deans pronounce graduates’ names and Reynolds’ focus on pronunciation accuracy drew the attention of reporters at USA Today, NPR, and InsideHigherEd.

The Hamilton faculty’s vote to implement a new diversity requirement generated a significant amount of local and national media interest.

National Public Radio conducted perhaps the most in-depth examination of the college’s new initiative with Professor of Chemistry Karen Brewer during which she focused on the evolution and future implementation of the requirement.

In June, Philip Klinkner, the James S. Sherman Professor of Government, published The easiest way to guess if someone supports Trump? Ask if Obama is a Muslim in Vox. The article triggered a stream of articles in other publications quoting and referencing Klinkner’s research, both during and after the campaign. These included Salon, Fusion, New York Magazine, The Washington Post, The Guardian, DailyKos and MSNBC.

Following Donald Trump’s unanticipated win, the media called on Klinkner to explain the reasons behind Trump’s victory. Beginning on election night, Klinkner was quoted in The Atlantic, The Washington Post’s Monkey Cage blog, Vox, TIME, Deutsche Welle, fivethirtyeight.com, McClatchy newspapers and The Guardian and was interviewed on Al Jazeera.

Before reaching its fifth anniversary, the Ruth and Elmer Wellin Museum of Art was honored to be highlighted in The New York Times Art Fall Preview for its Senses of Time: Video and Film-Based Works of Africa exhibition as one of the top shows in the nation opening in the fall.

As college application deadlines approached, U.S. News & World Report published Financial Tips for College Applicants without a Major and featured Weston Wilbur ’17, who spoke about coming to Hamilton without knowing what he wanted to do in the future. He took advantage of Career Center offerings designed to help students discover their passions that helped him choose a major to fit his interests. 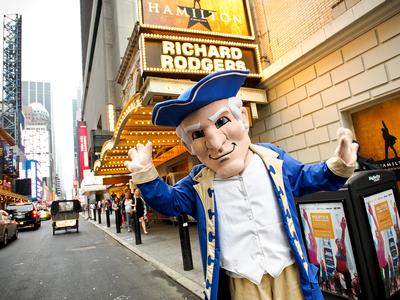 Finally, the musical Hamilton was a magnet for media attention throughout the year. The college fielded multiple requests to respond to how the Broadway production’s popularity affected the institution.

One of the articles distributed throughout the country was an Associated Press piece that originated with the Post-Standard (Syracuse) titled NY’s Hamilton College cheers success of Broadway ‘Hamilton.’ In the article, President Stewart explained Hamilton’s connection to the college and the campus’ feelings of pride in the musical’s success as well as the institution’s links to the founding father.