Men’s Golf Has NESCAC Player and Coach of the Year

Billy Geach ’23 was voted Golfer of the Year, Lauren [Steates] Cupp ’07 was chosen Coach of the Year, and three Continentals have been selected for the 2022 New England Small College Athletic Conference (NESCAC) Men's Golf All-Conference Team. 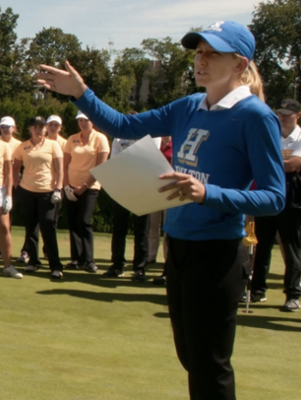 Cupp, who was named the conference’s Coach of the Year on the women’s side in 2021, joins Al Highducheck (2003) as winners of the men's award for the Continentals. She guided the Hamilton men to their first NESCAC title since 2003 and the team's first NCAA championship appearance since 1999.

Geach was leading the Continentals going into the NCAA championship with a 75.40 stroke average for 18 holes. Sixteen of his 17 rounds this season were below 80. He led Hamilton to a 12-shot victory in the 2022 NESCAC Championship by carding rounds of 71 and 76 and finishing in third place at 147.

McKeon posted a stroke average of 77.08 prior to the national championship. He finished in the top five in three tournaments including the conference championship where he ended up in fourth place at 148 after a pair of 74s.

Zeng owned a stroke average of 76.33 before the NCAA championship. He didn't move into the lineup until October, but was a fixture in the top five for the rest of the season. Eight of Zeng’s nine rounds were in the 70s, and his 72 in the NESCAC championship was the Continentals’ best score in the final round. He finished the tournament in fifth place at 149.

The Hamilton College men’s and women’s golf teams recently opened a first-class indoor facility that will enable them to keep competing at a high level in the NESCAC and the Northeast region.