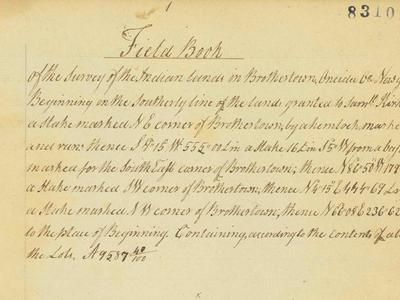 Representatives from the Brothertown Indian Nation (BIN) along with Marshall Historical Society members visited the Burke Library of Hamilton College to view two bound manuscript record books of the BIN held by the Special Collections.

Director of Special Collections and Archives Christian Goodwillie first offered a tour of the Hamilton cemetery, pointing out the graves of Samuel Kirkland and Skenandoa. The group then viewed the Kirkland Cottage before going to the Patricia Pogue Couper Research Room to examine the manuscripts. The documents from the Brotherton Indian Nation have been digitized and will soon be made publicly available through the library's digital collections.

Members of the Brothertown Indian Nation came from southern New England tribes including Mohegan, Montaukett, Narragansett, Niantic, Pequot, and Tunxis. In October 1774, they relocated to the area that is now Deansboro, which was granted to them by the Oneida Indians. Their preacher Samson Occom, a protege of Eleazar Wheelock and friend of Samuel Kirkland, moved to the newly named settlement of Brothertown to be their minister in 1775. The Brothertown story is interwoven with Samuel Kirkland's, as well as the Oneida Indians.