Back to News & Events 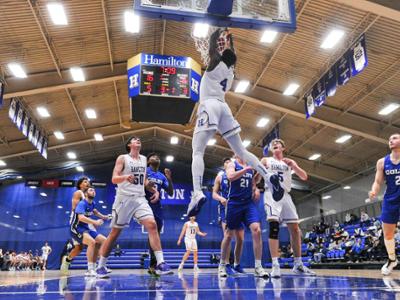 Osarenren is the first Hamilton player to receive the award in the 10 seasons the Continentals have played basketball in the conference. The 6-foot, 4-inch guard leads the NESCAC with 58 steals and is third with 42 blocked shots. He’s fifth with 7.9 rebounds per game and tied for seventh with 116 defensive boards.

Osarenren averaged 10.8 points and handed out 42 assists in 23 games played (22 starts). He was named the conference player of the week on January 17, and he finished the season with five double-doubles.

Osarenren, a philosophy major at Hamilton, finished his 77-game career with 523 points, 401 rebounds, 138 steals, 103 assists and 78 blocks. The Continentals finished the 2021-22 season with an overall record of 12-13 including 4-6 in the NESCAC. Hamilton hosted a NESCAC championship first round game.