In January, the Hamilton in France program welcomed 10 students accepted to spend their spring semester in Paris. Director In-Residence Roberta Krueger and Assistant Director Laurence Lemaire led an orientation program to help the students in their transition to France. This was followed by an all-student excursion which included students from both the fall and spring semesters.

The group visited the Passages des Panoramas, a covered walkway where the first galleries in Paris were located in the 18th century. The students also viewed a French film La Promesse de l’Aude.

One week after the beginning of classes, the students embarked on an excursion to Provence, in the south of France. The trip started with a visit to the Palais des Papes (Palace of the Popes) in Avignon. The city was home to the administration of the Catholic Church in the 14th century prior to its move to the Vatican in Rome. 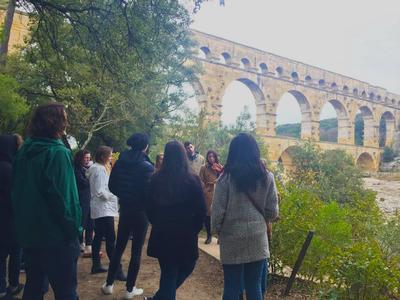 On Saturday, the group visited the Pont du Gard (the bridge of Gard) in the town of Vers-Pont-du-Gard. Composed of three levels, this bridge testifies to the architectural precision of Roman engineers. In Arles, the students visited the Roman ruins, including an amphitheater where bullfights take place to this day.

The group proceeded to Marseille where they paid a visit to the Museum of European and Mediterranean Civilizations. The guide explained that the museum stands as a testimony of the mélange of cultural perspectives and civilizations that were intertwined over centuries through the commercial exchange between countries of the Mediterranean basin and African and Asian countries.

On each day of the trip, the program allocated a break to allow students a chance to independently explore the regions they visited. In this sense, Hamilton in France is dedicated to making students’ time abroad complete with meaningful events that introduce them to French culture and history.