Hamilton has closed the books on another successful fundraising year, breaking several records in the process. Total contributions surpassed $25 million for the fifth time in the college's history. The Annual Fund reached a new height with more than $6.81 million in gifts, up from $6.6 million last year, and the number of donors, 11,089, was the highest in Hamilton's history.

The college’s priorities were reflected clearly in the top three initiatives to which gifts were directed: financial aid, Career Center programs and oral and written communication programs. The response in support of these key areas was enthusiastic.

"It is gratifying to see that Hamiltonians, both volunteers and donors, have once again rallied to the cause of our college with record-breaking fundraising results,” said Annual Fund co-chairs, Kate ’85 and Monty ’84 Pooley P'16. “One of every two Hamilton alumni supported the college this year, and we continue to be in the top 1 percent of colleges and universities in the nation in percentage of alumni who give back. The generosity of our alumni reflects the exceptional nature of their undergraduate experience and their willingness to stay engaged with the institution.” 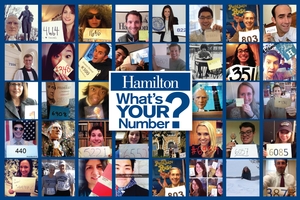 A $1 million challenge fund was created by several individuals to be released to the college when the total number of donors surpassed the 11,000 mark. Along the way to reaching the goal, an effective social media call-to-action program titled “What’s Your Number?” heightened awareness of the challenge. Donors were encouraged to post photos of themselves, selfies, with the number indicating where in the sequence of contributions their gift was registered.

“That total contributions reached last year’s level -- $25 million – and that the total number of donors increased by 6 percent is especially noteworthy as the college is between capital campaigns,” observed Vice President of Communication and Development Richard Tantillo.  “We are grateful for the tremendous financial and volunteer support that has resulted in this year’s gratifying results, and we are especially thankful for the leadership provided by co-chairs Monty '84 and Kate '85 Pooley P'16 who spent countless hours working with hundreds of Hamilton alumni and parent volunteers.”