After an almost four-hour, early-morning bus ride, members of the Shenandoah-Kirkland Initiative (SKI) were glad to arrive at the Akwesasne International Powwow earlier this month. This was their second time attending the annual powwow, which takes place at the A`nowara`ko:wa Arena on the Akwesasne (Mohawk) reservation on Cornwall Island in Ontario. Like all powwows, this social event celebrates the traditional culture, song, and dance of Native nations across the United States and Canada.

This year's trip was particularly special for SKI, as one of the group’s new members is Mohawk and grew up where the powwow took place and played high school lacrosse at the A`nowara`ko:wa Arena. The event was staged on a large grass field by the St. Lawrence River with seating encircling the dancers. To the side, musicians played traditional songs, singing in the language of their tribe.

SKI has had the privilege of being invited to some of the regular social dances the Oneidas hold on their reservation. This powwow was similarly intergenerational, featuring toddlers, teenagers, parents, and grandparents, bolstering the feeling of community and family. 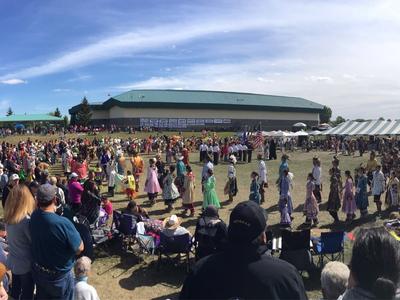 Unlike the social dances in the Oneida Council House, the Akwesasne powwow was a competition, with dancers performing in their traditional regalia. One memorable dance was the fast-paced Smoke Dance, derived from the ceremonial, Haudenosaunee war dance. Members of SKI took time to enjoy these dances as well as peruse the many stalls, which offered everything from jewelry and corn husk dolls to hand-knit sweaters. The Indian Taco was a popular choice for lunch, containing both chili and frybread.

Members of SKI are looking forward to continuing their annual trip to the Akwesasne powwow, as well as considering other powwows for future trips. Current SKI president, David Gagnidze ’20 commented, “Powwows like this offer us an incredible chance to witness Native song, dance, food, and community that can’t be grasped anywhere else as a non-Native. One gets the sense that everyone is family at powwows, even though most don’t know each other; they share a special connection since they all came to compete and watch the Akwesasne Powwow.”

The Hamilton College community will get the chance to partake in similar dances on Saturday, Oct. 6, when our Haudenosaunee (Iroquois) neighbors bring their social dance to campus. They will be led by Chris Thomas of the Onondaga Nation, Beaver Clan, and will also feature Daygots, a female Native rap artist of the Oneida Nation, Wolf Clan.