Songs of the Suffragists

Dare You Do It

(Lyrics by Henry Roby 1909, to the tune of The Battle Hymn of the Republic)

When came your foolish notion
Now so greatly overgrown
That a woman’s sober judgment
Is not equal to your own?
Has God ordained that suffrage
Is a gift to you alone,
While life goes marching on?

She’d planned to go home to India this summer, but instead the pandemic trapped Isha Parkhi ’21 in the U.S. With no internship in sight, she jumped on a surprise email from the College that landed in her inbox: An alumna was looking for a film student to help make a movie about the Suffrage movement. 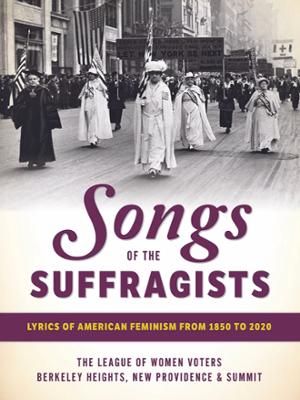 She got the internship, as did Allison Sheehan ’23, who has a strong interest in women’s history. Along with Laura Castelblanco Engelhardt ’95, the students comprised a three-woman team that created a movie to accompany Engelhardt’s book, Songs of the Suffragists: Lyrics of American Feminism from 1850 to 2020, published in March.

The timing of the movie was impeccable. The 19th Amendment was certified 100 years ago on Aug. 26, and the movie premiered a few weeks earlier. On Aug. 8, Engelhardt hosted a special event for Hamilton alumni where the film was shown.

Parkhi was director and editor, Sheehan the archivist, and Engelhardt the scriptwriter and narrator. The book and 28-minute movie focus on how Suffragists used songs to carry their message to everyday Americans. The activists often would pen new lyrics for already-popular melodies. One such was the nursery rhyme tune, Oh Dear, What Can the Matter Be?, to which the Suffragists answered, “Women are wanting the vote.”

Engelhardt is a writer and attorney who founded and runs Neutrality Now, a firm focused on arbitration and mediation. She’s also a member of the League of Women Voters of Berkeley Heights New Providence, and Summit, in New Jersey. “I do feel very strongly about feminism,and the women’s movement and voting, and so that's one of the reasons why I joined the League of Women Voters. It’s not a sexy organization; it’s a group that fights for the process-issues of democracy. It’s the bones of what keeps our democracy healthy,” she says.

The book is a project of her New Jersey chapter, and it was already in progress when she volunteered to get involved, co-writing it with former league intern Stephanie Lioudis.

I was raised to believe that everybody is equal, and that justice will always prevail in favor of the good. But as I’ve grown older, I have realized that the outside world doesn’t always guarantee that.

COVID-19 quashed Engelhardt’s tours to promote the book, and as she pondered a fallback plan, she thought about a short film. It would open up the information to the internet-using world and allow audiences to hear some of the songs she’d written about. (Tumbling After, a Hamilton all-women a cappella group, performs a few of them on the soundtrack.)

From there, Hamilton connected her with Parkhi and Sheehan, who dove in. Lots of the history was new to Parkhi; Sheehan was familiar with much of it, but some figures were new to her, including Ida B. Wells and Alice Paul. “And then also, aside from an academic standpoint, this was the first big outside-of-school project that I've ever really worked on for an actual organization and that was going to be seen not just but people I knew,” Sheehan says.

Englehardt says the two students did a fantastic job applying their skills and creativity to her script. She could see in their work how some parts of the history spoke directly to them, in particular the #MeToo era.

Parkhi says the section about #MeToo is close to her heart because it is one of the first global movements she’s witnessed as an adult. She came up with the idea to include photos of then-Supreme Court nominee Brett Kavanaugh and Christine Blasey Ford, a psychology professor, with right hands raised. Ford, under oath, accused Kavanaugh of sexual assault when they were in high school and, under oath, he denied the charges. He now sits on the U.S. Supreme Court.

The photos are accompanied by a song from the early 1990s, His Story by TLC. “His story over mine/His story will be his story and/My story is a waste of time,” the lyrics say.

Working on the movie gave Parkhi a chance to reflect on issues of justice and feminism. “I was raised to believe that everybody is equal, and that justice will always prevail in favor of the good. But as I’ve grown older, I have realized that the outside world doesn’t always guarantee that,” Parkhi says. “It has been a heartbreaking and infuriating process to make sense of all of this, and the film gives me an outlet to represent this reality in a way that sparks awareness for viewers.”