As dusk faded into darkness on a recent October night, words, illuminated in white light, trailed down an outer wall of the Kirner-Johnson Building, sending mysterious messages to those passing by. “Once I read in a children’s book that unicorns drink moonlight” and “Sorry our elephant orphanage has no vacancies.” What to make of it?

Challenged to limit their stories to 40 words, students in Professor of Literature and Creative Writing Tina Hall’s Flash Narrative class were assigned to write “a piece of flash fiction or micro-memoir.” Then they workshopped their piece and designed a slide for it, choosing a font and layout to be projected on the 25’ wall for 20 seconds in an hour-long rotation. 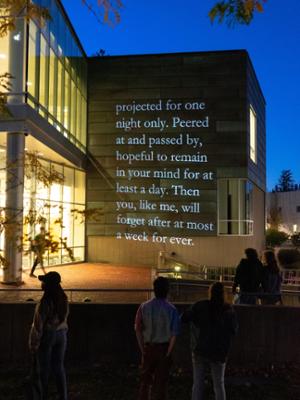 Projected for one
night only. Peered
at and passed by.
Hopeful to remain
in your mind for at
least a day. Then
you, like me, will
forget after at most
a week for ever.

The narratives ranged from the fanciful to the absurd to the thought-provoking: 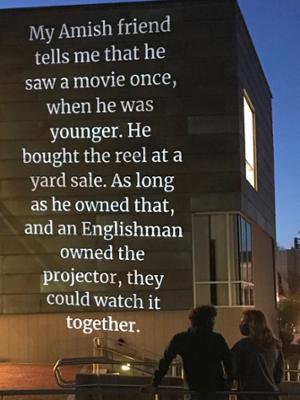 My Amish friend
told me that he
saw a movie once,
when he was
younger. He
bought the reel at a
yard sale. As long
as he owned that
and an Englishman
owned the
projector, they
could watch
it together.

“This class was originally designed around the letterpress, but due to safety precautions, we shifted the other hands-on projects to other mediums,” Hall said. “I like the idea of the large-scale projection because it plays with the idea of scale by making big something that is by definition small. It also works with the natural spatial constraint of the wall of the building.”

Caroline Boyd ’23, a member of the evening’s audience, said, “Not only was the overall effect of the projection contrasting with the darkening sky visually appealing, but it was a creative and COVID-friendly way to showcase student work. I noticed many walkers exclaiming in surprise when they saw the words illuminated on the building, and they were more than happy to stop what they were doing for a second to read.”

Director of Audio Visual Services Tim Hicks added an additional amount of creativity by managing the technical challenges. He and Hall are brainstorming about future installments.