Practicing year-round has paid off for members of the Hot Saucers, the men’s ultimate Frisbee team headed for College Station, Texas, where they will compete in the national finals. This is the first time in the program's 43-year history that the men’s team has made it to nationals (the women's team went in 2014 and 2015). “We’re thrilled to have the opportunity to compete against teams from across the country and make the jump to a bigger stage," said co-captain Erik Johansson '19.

Twenty team members were able to make the trip led by co-captains Johansson, Tyler Spector '19, and Henry Kapp '19. They will compete in pool play on Saturday against Michigan Tech, Middlebury and Franciscan and bracket play on Sunday, then fly back to campus on Monday.

“We’ll be up against some much higher ranked teams at Nationals - we’re seeded 13 of 16 - so our focus will be doing the best we can in pool play with hopes of advancing to the championship bracket on Sunday,” said Johansson. “Our team had a big senior class this year, many of whom have been playing together for four years. This contributed to our success, but we also got a lot of help from rising stars in our sophomore and junior class and a big freshman class. We’re a team that relies heavily on our depth, and we’re hopeful that this will serve us well in the heat of Texas.” Saturday’s temperature in College Station is forecasted to reach 82 and 88 on Sunday. 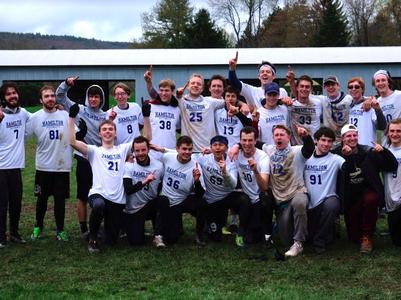 In the fall the team focused on development and participated in two or three tournaments to give new players a chance to get familiar with the sport and returning players a chance to improve further. In the winter, they practiced once or twice a week in the field house or indoor turf, and usually played a scrimmage or two with Colgate or Syracuse and other nearby schools. “The spring is our competitive season, where we compete in the college series championship,” explained Johansson. “This starts with a conference which was 4/13-14 in Oneonta this year. The top seven teams from conferences advanced to regions (4/27-28 in Oneonta), and the top team from regionals advances to Nationals. We went 6-0 in conferences and 5-0 in regionals.”