Undergraduate Study In China and a Path to a Ph.D.

I attended Hamilton’s Associated Colleges in China for the summer and fall semesters of 2006 and went back for the first field studies program in 2007. I graduated from Hamilton in 2008, and am now a doctoral candidate in Chinese literature at the University of Wisconsin-Madison.

My three semesters at ACC were full of challenge and reward, and had a significant impact on my life. First and foremost, ACC drastically improved my language skills and enabled me to directly engage with Chinese people and Chinese culture. My journey of learning Chinese did not end with ACC, but it was a formative time. I remember feeling a strong sense of accomplishment toward the end of my time at ACC, when I was walking on the street near the campus and suddenly realized that I passively understood what all the people were saying around me, without needing to focus my attention on them. 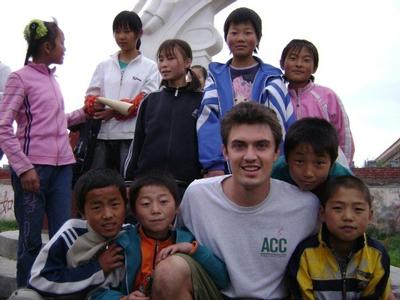 Language training at ACC required patience, persistence, and creativity. Much of my work at ACC was about learning to use the simple language skills I had in creative ways to convey complex ideas. These tactics have all been incredibly useful in my continuing career as a student and teacher of language, and they have also been helpful in communicating clearly and effectively in English in other areas of my life.

I taught English in Taiwan and Chengdu for about four years after graduating from Hamilton. Teaching language was not my first choice in occupation at the time, but I grew to love it. Teaching English in China also allowed me time to pursue other interests, and I became apprentice to a master of martial arts. I learned many styles of traditional Chinese martial arts, such as tai chi, kung fu, and weapons, such as the straight sword, saber, staff, spear, and monk’s spade.

As a doctoral student my focus is on Ming/Qing narrative and drama, and my dissertation will examine categories of monsters and spirits in different versions of the story The Legend of White Snake (Bai she zhuan). My long-term goal is to teach Chinese language and literature at the university level in the U.S.

This year I returned to Chengdu to research Sichuan opera, the traditional performance art of Sichuan province, on a Fulbright student grant. My project consists of two parts: textual research of scripts and related materials, and basic performance training as an actor.