Almost 300 posters plus souvenir pins, banners, toys, even cigarettes, comprise Associate Professor of Russian Frank Sciacca’s unparalleled collection of Soviet-era propaganda recently donated to the Burke Library Special Collections.  Collected during his more than 20 trips to the Soviet Union beginning in 1970, the posters – which are the primary focus of the collection – provide three decades of vivid visual propaganda accompanied by rabble-rousing sentiments, quotes from Lenin, and words targeted to energize a workforce.

“There were many poster shops that sold them cheaply – 5 and 10 cents a piece,” said Sciacca. “They were created to post in factories and for educational institutions and street display.” He was mesmerized by the posters’ bright colors and bold designs created by a whole union of artists commandeered to create a continuous supply. If an artist hoped to get art supplies with which to do his or her own work, one had to be a member of this union. 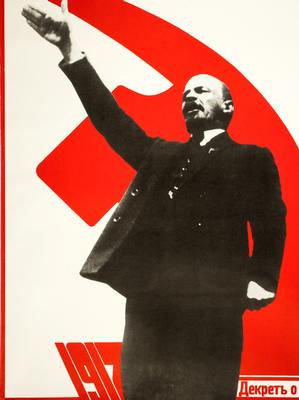 Sciacca first went to the Soviet Union in 1970 as a college student. He next returned in 1976 for a year of graduate school at the Moscow State University via Fulbright and  the International Research & Exchanges Board funding. Throughout his tenure at Hamilton, until the last decade when prices rose, he would regularly lead a bi-yearly trip along with Associate Professor of Russian John Bartle to Russia with students and members of the Hamilton community over spring break.

On every trip, his major challenge was transporting the posters home before the Soviet government collapsed. His collection includes posters from the 1960s and 1970s but the majority are from the ‘80s. He noted that toward the end of the glasnost/perestroika years, the posters became increasingly refined and reached their creative zenith. 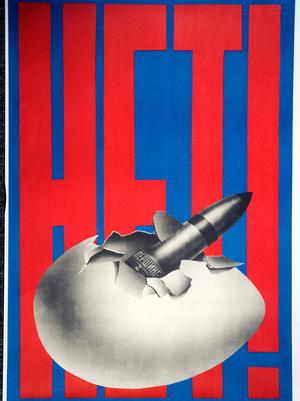 A sampling of Sciacca’s collection was on display last year in the exhibition marking the centennial of the Russian revolution. In 1995 there was a larger exhibition of his posters in the Emerson Gallery.

Director of Special Collections Christian Goodwillie said that there are very few collections that come close to Sciacca’s. “This is one of the best collections of Soviet posters and ephemera in the nation,” according to Goodwillie. Sciacca pointed out that the breadth of this collection – covering the glasnost period themes, as well as the long Brezhnev period of Cold War, the push for increased industrial output, boasting about economic gains, pride in Soviet achievements in science and space exploration, adulation of Marx, Engels, and Lenin-Lenin-Lenin, the heroic act of building socialism, the leading role of the Communist Party – make this collection truly unique.

Goodwillie recounted a couple varying reactions to the posters when they were displayed in the special collections office. One Hamilton worker, who had grown up in Soviet Union, drew back in horror when he saw the posters. A new student, who knew little about the Soviet regime, was fascinated and found the topic “exotic,” per Goodwillie. 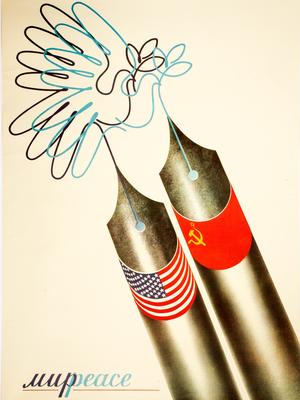 Beginning last spring, Konstantin Tokarr ’19, a student whose native language is Russian and whose parents grew up in the Soviet Union, began translating and documenting the posters for the library’s special collections. Tokarr’s father is a translator, and he became a helpful resource when Tokarr came upon unfamiliar phrases from a bygone political and military era. This project also offered an opportunity for Tokarr to discuss with his parents their experiences growing up in the Soviet Union, a topic the family had not often talked about before.

Tokarr was impressed with “Just how beautiful they [the posters] are. Along with being propaganda, they are all works of art. They are very effective in attracting your attention. They are not boring. The translating process could be perceived as boring, but just looking at them is enjoyment.”