Our Campaign
→
Skip to Main Content
Home
News & Events
US China Ambassador Greets Students at B...

Back to News & Events

William Utzschneider ’19 and Georgetown student Janine Karo, both participants in Hamilton’s Associated Colleges in China (ACC) program, along with ACC Resident Advisor Timothy McMannis, attended a reception to meet U.S. Ambassador Terry Branstad and his wife Christine at the ambassador’s residence in Chaoyang District, Beijing.  Along with the ACC program, several other study abroad programs sent select students and their coordinators to attend the 50-person reception.  All guests were first greeted by Ambassador Branstad and his wife.

According to a report provided by ACC Administrative Director Yin Zhang:

Ambassador Branstad offered opening remarks to the crowd of students and professionals at the Oct. 20 event.  As governor of Iowa – a position he held for a record 21 years – he recounted meeting Chinese President Xi Jinping in his home state before ever knowing that Xi would become General Secretary, and that he now hopes to build on this friendly relationship with Xi in his role as ambassador.   He stressed the importance of hospitality and proper conduct in international relations. 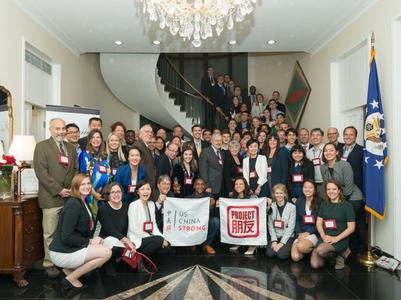 The ambassador’s speech was followed by the leader of the U.S. China Strong Foundation, Travis Tanner, who told students in the crowd that they should seize any opportunity they can get to embrace new international experiences and that future change depends on their leadership.  Golden Bridges Foundation Founder and President Holly Chang spoke on how critical U.S.-China relations are, especially since U.S. study abroad interest in China has declined from 1 in 1,000 American students studying abroad in China in 2014, to 1 in 1,600 students studying in China today.

Utzschneider and Karo both enjoyed the event, adding how welcoming and stress-free the event was.  They thought the evening was initially going to be quite formal, but found it easy to connect with other students and listen to the ambassador’s advice. The reception was funded by the Golden Bridges Foundation and the US China Strong Foundation.