A Sense of Place

To set foot in India’s Vishnupada temple, the most important site in the sacred city of Gaya, is to absorb a sense of place and purpose. Each year hundreds of thousands of pilgrims travel there to perform death rituals to honor their ancestors. With its niches, shrines, and statues, the temple is rich with information, and every object tells a story about Gaya’s complex history.

This is why Associate Professor of Religious Studies Abhishek Amar wants students in his Dying, Death, and Afterlife course to experience Vishnupada inside and out. To get there they pull on a virtual reality headset and are transported from Christian A. Johnson Hall into a structure of pillars and stone. It can be dizzying.

“I’m not trying to give them just a glimpse,” Amar says. “I’m putting them in the place and its context.”

Gregory Lord, former lead designer and software engineer of Hamilton’s Digital Humanities Initiative, painstakingly developed the virtual Vishnupada, working with Amar. It’s made to accurate scale using drawings and three-dimensional photographs taken at the site, most by Amar himself.

They understand this digital world; they engage with it. My goal is to help them also have some kind of critical sense of how to engage with this, because digital is real now.

The temple provides the wow factor in an ongoing broader project — Sacred Centers in India, a digital archive that preserves a record of relatively unstudied objects and buildings as they exist and are used today. Gaya is home to roughly 55 shrines and temples; so far the digital archive includes data for 20 of the religious sites. Over the six years it has taken to create the project, a half-dozen students have worked on it, hired by the DHi as interns or class scholars.

All told, the archive is an ambitious undertaking that benefits Amar’s research, Hamilton students, and scholars around the world; the archive is open for public use. Amar specializes in the archaeological history of South Asian religions, researching the history of Hindu Gaya and the nearby town of Bodhgaya, one of the earliest and most important sacred sites for Buddhists. Completing a Bodhgaya digital archive is a future phase of the Sacred Centers project.

Amar turned to digital technology in his scholarship in part because it enables him to apply a quantitative approach to exploring large amounts of data. “There has to be some kind of organizational structure so that it helps you think and process it, to ask all sorts of new questions that we had not thought about previously,” he says. 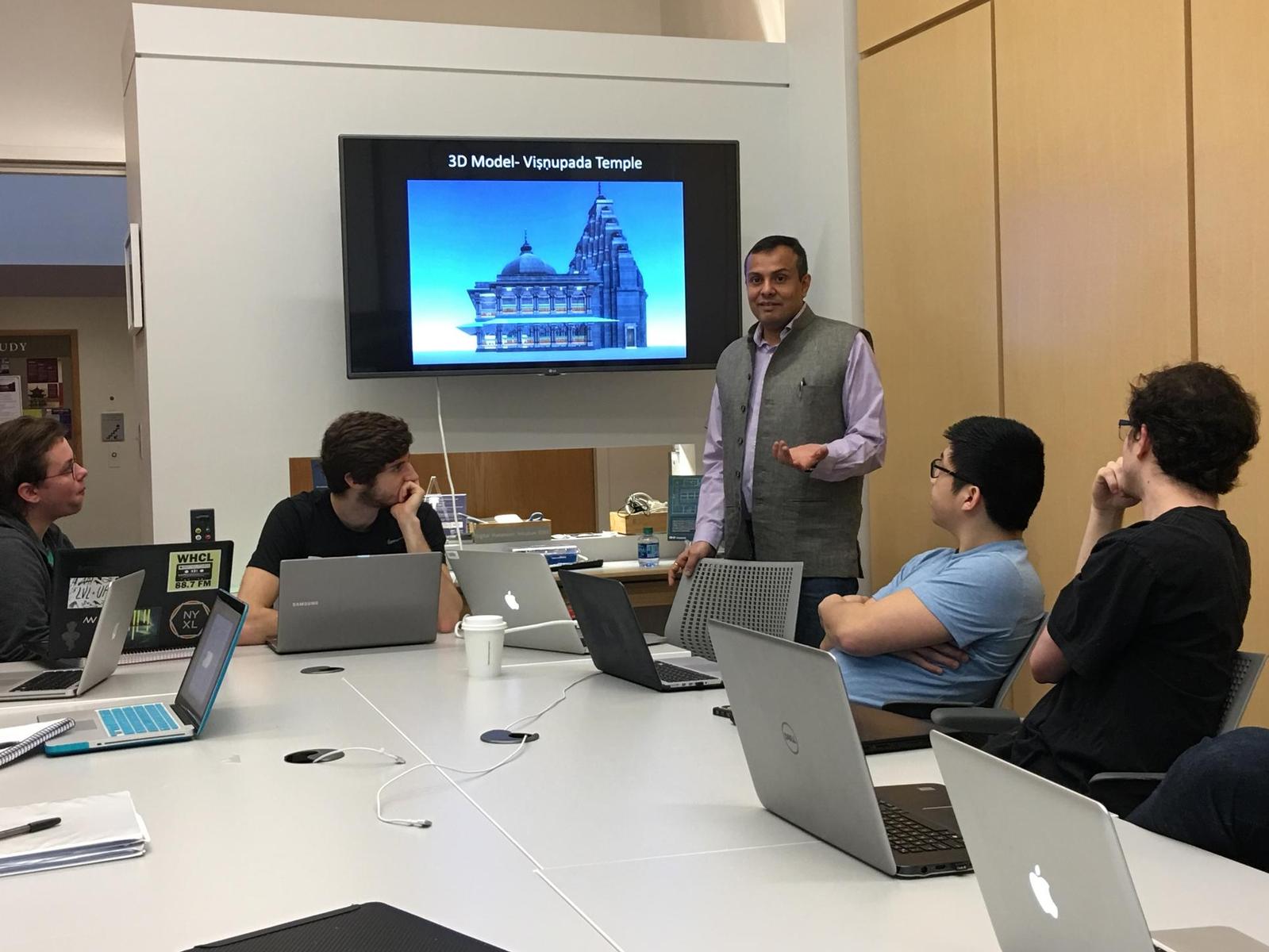 He developed the virtual temple specifically to supplement more traditional coursework. He’s found that many students are very savvy about technology, delving deep for their individual projects. “They understand this digital world; they engage with it. My goal is to help them also have some kind of critical sense of how to engage with this, because digital is real now,” Amar says.

When James Kurtak ’17 hears snatches of conversation and background sounds in the virtual temple, he could be forgiven a flash of proprietary pride. For a course project he developed the 3D audio. A Hamilton economics and Hispanic studies major, Kurtak discovered on his own that he loved to code. He also loved taking courses with Amar. After Kurtak first experienced the temple, he pondered the idea of adding sound. He’d already developed his own VR and 3D modeling projects, and, with Amar’s approval, he went to work, finding it difficult going. He succeeded all the same.

Kurtak now works as a quality assurance specialist at the Jahnel Group, a software start-up in Schenectady, N.Y., but expects to move into a position as a Java developer. His work on the temple and on his own projects helped him get through the door at Jahnel. Some tech companies don’t necessarily look for computer science students, Kurtak says. “They’re more looking for [people] working with stuff exactly like this and who have an enthusiasm for new technology,” he says.

Lauren Scutt ’17, a religious studies major with a history minor, confesses that she had no digital skills when she began to work on the Sacred Centers project. She was a DHi class fellow who worked with Amar to organize the metadata, which meant she had to learn to look at the project through the eyes of its potential users. As she built her digital chops, Scutt developed a deeper understanding of the material.

“I honestly could go on and on about everything I learned. I think it led me to figuring out what I wanted to write my thesis about. It became a critical skill for me in internships I had and then also now in my job,” says Scutt, who works as an account executive at Grey Advertising in New York City.

Amar has learned that providing digital opportunities to students has the potential to create new paths for them after Hamilton. “If we continue to do that, they’ll be successful,” he says.