Not long after arriving at Hamilton, Judy Zhou ’19 needed to make a large-format poster for a chemistry class, and the College’s digital media interns were on duty to help. Zhou was intrigued by them, curious to know exactly what they did on campus.

Her zeal and talent for technology were about to be unleashed.

“They told me they basically get paid to learn all of this tech, and I was like, ‘This is amazing, where do I sign up?’ So I signed up and got the job,” Zhou recalls, still sounding awed. Digital media interns work with the professional staff at Burke Library, headquarters for technology on campus.

Digital technology and modes of thinking are changing the world and Hamilton prepares its graduates to work effectively in this new environment. Digital leadership is a key priority of the College's Because Hamilton campaign.

Zhou loved that job. By her sophomore year she’d excelled as the intern in charge of 3D printing. More tech lay ahead for the inexhaustibly creative computer science major who minors in art.

As a junior, Zhou jumped on an offer to become a Hamilton instructional technology apprentice, and by the end of the yearlong experience she’d created a virtual reality project so promising she has hopes of fully developing it for a wide audience after she graduates. During the apprenticeship she worked with College educational technologists who collaborate with professors and students to foster new ways of teaching and learning.

To cap the experience, Zhou was required to develop a “passion project” that could be used in a classroom. Her inspiration was a “walk of privilege,” an exercise she’d done during training as a resident advisor. Participants stand side-by-side, and, when asked, step forward or back in response to prompts such as, “If you come from a single-parent household, take one step back” or “If one or both of your parents have a college degree, take one step forward.” The idea is to illustrate the impact of privilege.

This design promotes self-reflection, while seeing where everyone else stands at the end promotes empathizing with others.

Remembering how moved she’d been to see RAs she knew standing far ahead or far behind her, Zhou realized that the powerful exercise was worth bringing to more students — in classrooms. She resolved to build a virtual reality “empathy walk.” First, however, she needed to learn the software Unity, a cross-platform gaming engine. Also, she needed responses from real people to use to place the avatars in her VR environment. Zhou surveyed 25 people of different ages, races, religions, and backgrounds to see how they responded to the prompts.

She created her “empathy walk,” which begins with the user standing in a gym with avatars who then disappear until the exercise ends. “The purpose is to focus on yourself and what you are doing rather than looking around to see the people who moved,” she explains. “This design promotes self-reflection, while seeing where everyone else stands at the end promotes empathizing with others.”

To fully put the user in that VR gym, Zhou incorporated Ambisonic sound, a 360-degree surround sound that indicates avatar movement. At the end of the walk, the avatars reappear, and the participant can scan the gym to check their locations.

Even in its current beta stage, Zhou’s project is amazing, says Hamilton Instructional Designer and 3D Technology Specialist Ben Salzman ’14, who recruited Zhou for the apprenticeship and became her mentor. With more work, he envisions the walk being of use in counseling centers as well as classrooms. 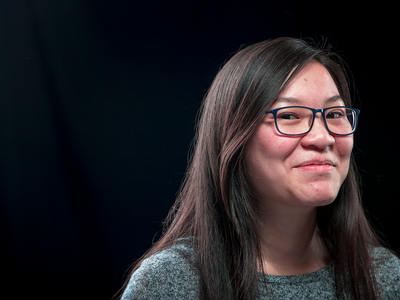 In Salzman’s estimation, Zhou will leave Hamilton equipped to enter a job in college instructional technology. Until the apprenticeship, she’d never used Unity. Now she’s skilled enough to help a literature professor explore a VR project with a class. The experience came through the Instructional Technology Apprenticeship Program, part of the New York Six liberal arts consortium of colleges, of which Hamilton is a member.

Zhou, now a senior working for Hamilton as an assistant web developer, is leaning toward web development as a career. Her dream job would combine art and technology. She’s ready for whatever. “Through comp sci and projects, I’ve developed my way of thinking, of step-by-step checkpoints to get to my end goal,” she says.