Improving Conservation for Florida's Rivers and Their Inhabitants

I sat on a boat in the Wakulla River, field notebook in my lap. I had heard about the more scientific aspects of this Florida river for weeks: a coastal river system, influenced by marine waters, and fed by a first magnitude freshwater spring. While working in the paleontology lab with Andrew Fredericks ’25 and Visiting Assistant Professor of Geosciences Kris Kusnerik, the Wakulla River had just been a collection site for some of our fossils. But now, as I looked at the clear water, I saw a real place — an ecosystem that I hoped our research could play a role in conserving.

The Wakulla River, like many Florida rivers, is threatened by invasive species, nutrient run off, rising sea levels, and direct human impact. These threats also affect its diverse animal populations. In our two days on the river, we saw alligators, turtles, and manatees. But the ones we were most interested in — the ones we were there to collect — were snails.

Snails, as a kind of mollusk, are often used as environmental indicators. In a way, that was their purpose for our project too, but from a more paleontological perspective. For weeks at Hamilton, we collected data on snail shell fossils from three Florida river systems, including the Wakulla. Kusnerik had collected these samples during his Ph.D. work on river systems at the University of Florida. 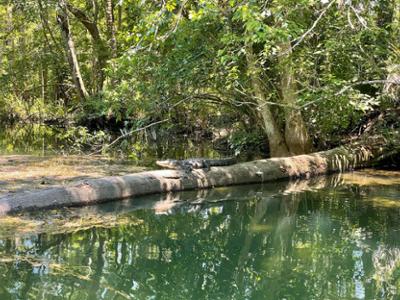 “There hasn’t been a whole lot done in the world of rivers, especially spring-fed rivers,” Kusnerik said. “And when we started the work, we found more and more that there are a lot of really unique, really interesting trends happening in these ecosystems.”

Looking at the fossil samples gave us insight into the river environments of the past. But once we arrived in Florida, before going to the Wakulla River, we had the chance to collect data on more of Kusnerik’s specimens housed by the Florida Museum of Natural History. Some of these specimens were “live” samples, preserved in alcohol or on ice. The rest were part of death assemblages, a combination of recently dead specimens and long-dead fossils collected from one location in the river.

With data on the live and death assemblages, we had information that spanned thousands of years. We could now do more than make observations about the past; we could compare those observations to ones about the present, and eventually apply our findings to real-life conservation efforts. This is part of Kusnerik’s field known as conservation paleobiology.

“I got into conservation paleobiology because it can get really applied,” Kusnerik said. “You walk away from your data with the ability to make some important conservation or restoration suggestions to state park managers and conservation workers.”

Though our summer research likely won’t end up on a state park manager’s desk, it is a step along the way to making these important suggestions. The new samples we collected from the Wakulla will lead to more research, which eventually could lead to improved conservation for the beautiful and threatened Florida rivers.

As the sun comes out and the stars start to fade, Ryan Hunt ’23 and Alvaro Marin Miralles ’23 head back to their dorms. On clear nights, they are up at the Peters Observatory with Assistant Professor of Instruction in Physics Adam Lark until 4 a.m., tracking their target star system and hoping to see its brightness decrease. That decrease is caused by an object eclipsing its light, an indicator that the star system, like our solar system, may have its own planet.

Professor Peter Guiden is working with Maddie Vavra ’23 and Becky Rosen ’22 to better understand the biology of trees that are native to Central New York. The trees grown in the science center greenhouse will eventually be planted on campus as part of the effort to conserve and restore biodiversity there.