Wear Your Tech on Your Sleeve

In this spring’s computer science course Wearable Tech, students created gadgets that could attach to a variety of items — from hoodies to baseball gloves to plants — to relay information and provide fun and useful services.

Students conceived of, designed, and programmed a variety of products that employed an Adafruit Circuit Playground Express board, a small, round piece of hardware that can be coded to carry out various functions. Using the board, students learned how to code and create functional devices using the Python programming language.

One such device, a “plant support system” created by Rose Kromer ’23 and Samantha Smith ’23. evaluates a houseplant’s environment, monitoring plant temperature, soil wetness, and the amount of light the plant gets. According to Smith, creating the system as a final project enabled her and Kromer to utilize and showcase the Python skills they learned throughout the semester.

For their final project, Nate Goodman ’20 and Jefri Schmidt ’20 designed something they could wear themselves. “Our ‘smart hoodie’ features an interactive map of the NYC subway system and is touch activated using conductive threads,” Goodman said. “When a subway line is touched, it plays an iconic NYC song, such as Theme from New York, New York by Frank Sinatra. It also senses sunlight/temperature and plays an upbeat song when the wearer moves to a warmer setting.” 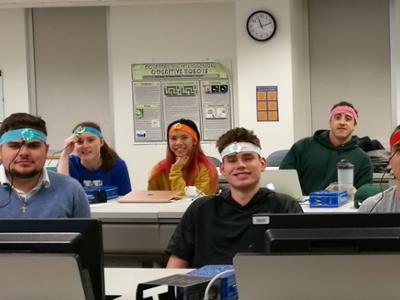 By the end of the semester, the class had built a variety of contraptions. Some devices, such as a shoebox pinball machine, provided entertainment, while others responded to the ongoing pandemic, like a coronavirus temperature sensor.

Wearable Tech gave students an introduction to basic coding and the growing field of computer science. Jon Beniers ’21, who took the class as his first computer science course, said, “I would highly recommend it to other Hamilton students, even people who have never taken a computer science course or lack knowledge when it comes to coding and the software used … learning about wearable technology and other areas like 3D printing, and attempting to solve daily problems with technology, made this class super enjoyable and engaging.”

(This course was taught by Nasar Al-Madi, an instructor in computer science at Hamilton, 2019-20.)