Rare Opportunity for Students at the Wellin

Jane Taylor ’22, an art history and biology double-major, was among students who worked with artist Yashua Klos on his upcoming exhibition at the Wellin Museum. See what she has to say about the experience. 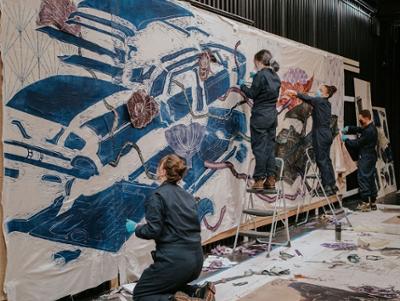 Over a two-week period, I had the opportunity with six other students to participate in the creation of a 9 feet by 24 feet mural for Yashua Klos’s upcoming Wellin exhibition, Yashua Klos: OUR LABOUR.

Having become familiar with Klos’ work and talent, I felt a bit daunted by the prospect of the project - after all, what help could I and my fellow students really provide to a renowned artist with such a unique voice? Knowing some of the background of his work and that an artist’s work often reflects some part of themselves, I shouldn’t have been surprised when he exhibited generosity and willingness to collaborate in our work together.

read about other students' research

Klos’ vision of the mural and the process he directed to achieve it echoed the organic nature of his art. With the work from the previous day complete, each morning the project would change slightly: a new design, new color of ink, new fleeting idea would instruct our path for the day. Some days would be occupied stenciling an Art Deco design onto canvas, while on other days we would ink woodblock after woodblock until the ground was scattered with prints of flowers and pipes. As we pieced together mechanical parts to achieve a whole and placed sprawling vines across the canvas, we cultivated the growth of an inanimate object that captured the vitality of Klos’ and our work. 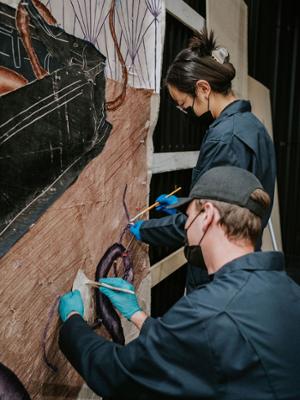 Similarly, we honed new skills under his guidance, as well as confidence in them. Carving wood was initially imposing due to the permanence of every cut,  but became playful. We admired one another's work, watching how individual patterns and styles mingled on the canvas. Even mistakes became part of the organic nature of the art, as Klos insisted, by pronouncing them “happy accidents.”

As we neared the end of the project, Klos expressed his desire to honor the title of his exhibition, insisting that though it was his vision, it was our collective labor that had brought us there. So, on the final day together, we placed a flower on the right edge of the mural, each petal displaying one of our signatures. To cement our role even further in this work of art, he presented us with a poem he had written, stating that each of us had become a part of the lineage of woodblock printers that came before him and would come after him. 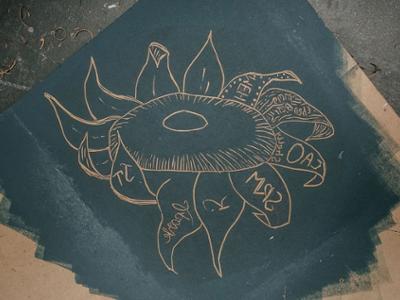 In this group of students, each of us hopes to enter into different aspects of the artistic world - whether it be in its creation, display, or care. The opportunity to work with Klos and collaborate so closely with one another, to become a part of this “lineage” (albeit less seasoned than our predecessors), has led me and my colleagues one step closer to entering into this artistic world.

To learn more about upcoming exhibitions and events, sign up for the Wellin e-newsletter here.