The 6 p.m. Sunday slot on student radio station WHCL belongs to Pat LeGates ’18, and like the WHCL lineup, LeGates is eclectic.

He designed his own cognitive science major. He’s a musician, poet, Daily Bull editor, and rock climber who wants eventually to attend grad school to study the intersections of cognitive science and critical-theory philosophy. On his electronic music show, he mixes live, loving the chance to create and share but not worrying much whether people are listening.

“There’s something, like, so cool to me about being able to just anonymously put this stuff out in the air. And I’ll tweet a link to it, and who knows who’s going to find it? Or if anyone does,” LeGates says. 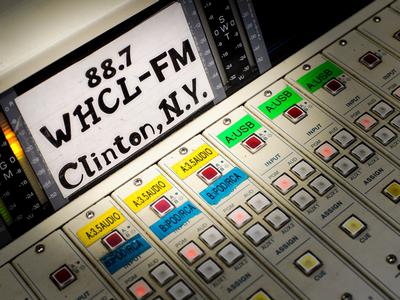 He’s one of scores of students who broadcast music and conversation across College Hill and environs. WHCL is one of Hamilton’s biggest student organizations.