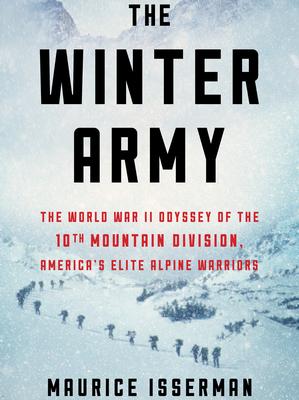 It’s been 75 years since the U.S. Army sent its 10th Mountain Division to the Italian front in the final months of World War II. The band of soldiers would lead the Allied advance through the Alps, ultimately guaranteeing the German surrender in Italy. The bravery, struggles, and accomplishments of the 10th are documented in The Winter Army: The 10th Mountain Division in World War II, a new book by Maurice Isserman, the Publius Virgilius Rogers Professor of American History.

Drawing largely from letters written by soldiers to their families and friends back home, Isserman provides frontline views not only of such famous battles as Riva Ridge and Mount Belvedere, but also about the bonds of brotherhood formed under the most harrowing of conditions — altitudes of up to 13,500', driving blizzards and ice storms, and temperatures that dropped to -30 degrees.

“The 10th was a truly unique group that started from scratch as a ragtag cohort of mountaineers, Ivy League student skiers, and just about anyone with outdoor experience who wanted to join the war effort,” said Isserman during a recent campus book talk. “One of those who joined this unit was the late Donald Potter. I was inspired in part to write this book by the conversations Don would have with me and many others here at Hamilton about his experiences back then.”

Potter, who taught in the Geology Department at Hamilton from 1954 to 1988, was only 19 when he postponed his studies at Williams College to enlist in the mountaineering division. His journey, along with those of others who formed the 10th, plays a huge role in The Winter Army. Injured several times during the war (he would later receive the Bronze Star Medal for meritorious service in combat), Second Lt. Potter wrote this in a letter to his mother in 1944, describing a Christmas Eve service he had attended the evening before:

“Christmas carols were sung with quote a bit more meaning that most of us have ever put into them and then to end it up we sang ‘Onward Christian Soldiers’ until every beam and rafter in the chapel was standing on end. I’ve never heard anything like it before.”

Isserman recounts his approach to researching and writing the book in an essay in The New York Times titled What It’s Really Like to Fight a War and subtitled On Veterans Day, set aside Hollywood clichés. An interview with Isserman on North Country Public Radio is available on that station’s website for Veterans Day as well.

An exhibit commemorating Potter and the 10th Mountain Division will be on display in the Burke Library until the end of February. It features a variety of World War II artifacts, letters, and a copy of Isserman’s book.