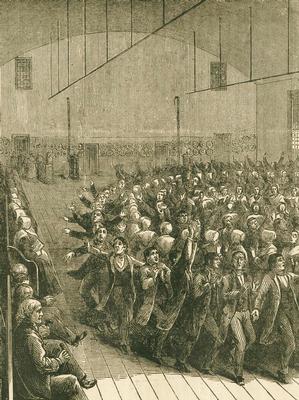 The Couper Press publishes scholarship on communal studies and other topics that highlight the rich holdings of the Hamilton College Library’s Special Collections and Archives. The press was established in 2006 under the direction of Couper Librarian Randall Ericson and named in honor of Richard W. Couper ’44, a Hamilton alumnus, life trustee, and benefactor of the Burke Library. The press publishes a quarterly journal and three monograph series.

American Communal Societies Quarterly features scholarly articles focusing on those American communities that have intentionally separated themselves from society in general and live according to a shared set of principles, whether religious or secular, in common ownership of property.

The American Communal Societies Series publishes books presenting new scholarship pertaining to American intentional communities as well as reprints of, and critical introductions to, important historical works that may be difficult to find or out of print.

Shaker Studies publishes monographs focused on the United Society of Believers in Christ’s Second Appearing, a religious community with English origins that first established itself in Watervliet, New York, in 1774. The Shakers created about twenty villages between Maine and Indiana during the 19th century and became known for their dance-like rituals, fine agricultural products, and the simple but exacting craftsmanship of their buildings and furniture.