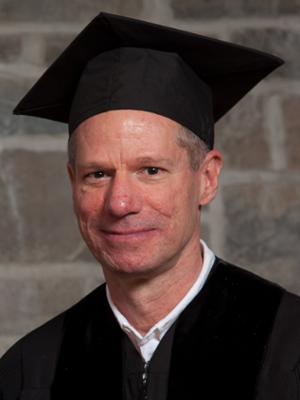 “I became a writer at Hamilton,” you declared in your 25th Reunion Yearbook. There is ample ­evidence to ­support that assertion.

You left College Hill in 1982, English literature degree in hand. A year later you sold your first short story to The New Yorker, which published 10 more over the next few years, while Harper & Row published One Way or Another, a collection of short fiction containing your first two O. Henry Prize stories.

A second collection of short stories and six novels ­followed, including Coral Glynn earlier this spring. Your work has been translated into a dozen languages and several of your books have been adapted for film, among them The City of Your Final Desti­nation starring Anthony Hopkins.

Reviewers see the influences of Jorge Luis Borges, Henry James, Noël Coward, Franz Kafka and even Shakespeare in your work, but you cite the novels of British women writers such as Rose Macaulay, Barbara Pym and Penelope Mortimer for their “elegant and accomplished use of language and their penetrating and sensitive exploration of personal life.” So strong is their influence that a reviewer recently concluded, “…one of the best British novelists writing today was born in New Jersey.”

You have been called a writer who “possesses a lithe and subtle wit,” who produces “work of quiet beauty and tender lyricism,” and “whose star gets sharper and brighter with every book.” The New York Times cited Coral Glynn as “a book of delicate sensibilities.”

Peter Cameron, acting upon the authority of the Board of Trustees, I am pleased to confer on you the degree of Doctor of Letters of Hamilton College, admitting you to all of its rights and privileges. In token whereof, we present you with this ­diploma and invest you with this hood.