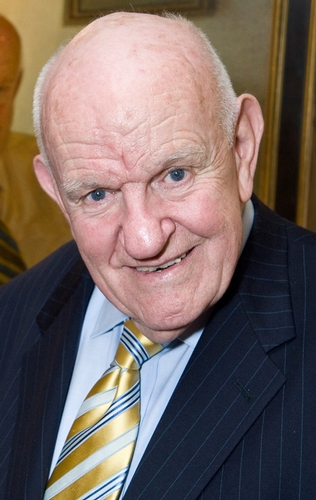 Impressive advances have been made in recent years in neonatal care. Such conditions as exceedingly low birth weight and respiratory disorders once doomed the life of the newborn. Now they can be overcome through ­diagnosis and treatment interventions in neonatal intensive care units. As a pediatrician and national leader in the ­specialized field of neonatology, you have contributed immeasurably over the past 30 years to furthering those advances.

At the age of 17, you arrived on this Hill from Long Island, reportedly with two goals in mind: to prepare for medical school and to play basketball. And as a pre-med, you managed to excel not only in basketball but also in lacrosse, becoming co-captain of both varsity teams. In addition, you took an active role in student government and were elected to Pentagon. Following your graduation as president of the Class of 1958, and with a little help from Dean Winton Tolles, who fixed upon you his uncanny eye for recognizing great future promise in youth, you entered medical school at Wake Forest University. After acquiring your M.D. degree and service with the Navy, you began your pediatric residency at Babies Hospital in Manhattan. In 1971, you were named director of its neonatal intensive care unit, and under your ­leadership, the unit gained international recognition for its innovative approaches.

Besides practicing, teaching, supervising, and making contributions to the medical literature and ­presentations to international conferences, you chair the Pediatrics Department at Columbia University’s College of Physicians and Surgeons, where you are the Reuben S. Carpentier Professor of Pediatrics. Your professional colleagues have become keenly cognizant of the many contributions you have made in the field to which you are nobly dedicated, and we are delighted to add our recognition to theirs.

John M. Driscoll, Jr., acting on the authority of the Board of Trustees, I am very pleased to confer on you the degree of Doctor of Humane Letters of Hamilton College, admitting you to all its rights and privileges. In token whereof, we present you with this diploma and invest you with this hood.