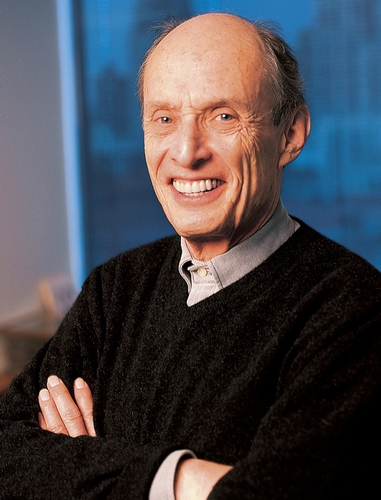 A native of New York City, you joined the Navy at the age of 17 during World War II, and soon demonstrated your inventiveness of mind by helping to develop an early-warning radar system to detect incoming enemy planes. Following in the footsteps of your father and uncle, you arrived on College Hill not long after the war ended, and, if we can believe the Hamiltonian yearbook, you became noted for your apologetic classroom entries on the very last stroke of the bell. Still, you obviously arrived in time to absorb all that was worthy of retention, for you finished your course of study in just two years and a summer, and were graduated Phi Beta Kappa and with honors in physics and mathematics.

After obtaining your Ph.D. degree from the Johns Hopkins University and postdoctoral studies in biochemistry, you directed ­biochemical research at Geigy Research Laboratories and subsequently served as a professor of pharmacology at the Albert Einstein College of Medicine and the Yale University School of Medicine. By the time Rockefeller University turned to you in 1983 to head its then new laboratory of molecular and cellular neuroscience, your research achievements had already been widely hailed.

More than 40 years ago, when you began your pioneering work, you were virtually alone in studying the ­biochemical basis of how nerve cells function. Eventually, the validity of your work overcame initial skepticism to achieve recognition, and the paths you opened had revolutionary results for neuroscience. Your discoveries have ­provided a conceptual framework for understanding how the nervous system functions at the molecular level, and the practical result has been breakthroughs in understanding the molecular underpinnings of such human scourges as Parkinson’s and Alzheimer’s, as well as schizophrenia and depression, leading in turn to improved therapeutic ­treatments for those afflicted.

For your extraordinary contributions to the advancement of neuroscience, you have received many honors and awards, culminating last year with the Nobel Prize. It is our privilege, and your alma mater’s very great pride, to add Hamilton’s own recognition of your trailblazing achievements.

Paul Greengard, acting on the authority of the Board of Trustees, I am very pleased to confer on you the degree of Doctor of Science of Hamilton College, admitting you to all its rights and privileges. In token whereof, we present you with this diploma and invest you with this hood.